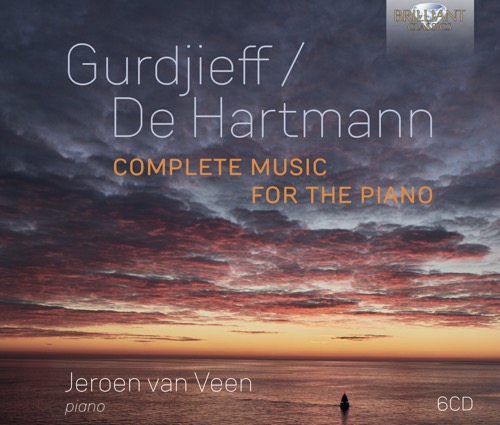 The Dutch pianist Jeroen Van Veen, known for his specialisation in the performance of minimalist music – he has published the Minimal Piano Collection with almost thirty hours of music, on as many CDs – has just released on the Brillant Classics label a box of six CDs – Gurdjieff / De Hartmann: Complete Music for the Piano – with 168 of the nearly three hundred pieces transcribed into Western notation by the Ukrainian composer Thomas de Hartmann (1886-1956) from the interpretations made by his friend and teacher, the Armenian philosopher and mystic Georges Gurdjieff (1877-1949), collected or inspired by his travels in the East, of a purely meditative and spiritual character. The 168 pieces range in length from 43 seconds to eleven minutes, for a total of five and a half hours.