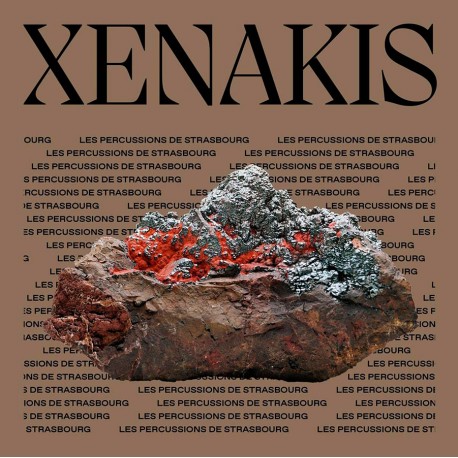 2022 marks both the centenary of the birth of Greek-French composer Iannis Xenakis (Brăila, Romania, 1922-Paris, 2001) and the sixtieth anniversary of the founding of Les Percussions de Strasbourg, the contemporary music ensemble launched in 1959 by Pierre Boulez, when he was invited to Strasbourg to conduct Le visage nuptial. The six percussionists gathered on that occasion (Bernard Balet, Jean Batigne, Lucien Droeller, Jean-Paul Finkbeiner, Claude Ricou and Georges Van Gucht) decided to found an ensemble, which in 1962 became Les Percussions de Strasbourg with Jean Batigne at the helm.

Under the artistic direction of Jean Geoffroy (between 2015 and 2017), the six percussionists who have been its historical hallmark have evolved into a larger ensemble of variable geometry around a fourth generation of percussionists.

Over the course of its sixty-year career, the ensemble has premiered more than three hundred percussion works of contemporary music, including Persephassa (1969) and Pléïades (1979) by Iannis Xenakis, the two works that Les Percussions de Strasbourg has just released to celebrate the double anniversary.

The album is in fact a book-disc. The “book” part, of 72 pages, is written in French and English, and consists of seven short chapters. Jean Geoffroy writes three, including analyses of the two works. Anne-Sylvie Barthel-Calvet, professor of musicology at the University of Lorraine, wrote three chapters. One on the relationship between Xenakis and Les Percussions de Strasbourg as “joint creators of new sound worlds”, another on the “spatialisation of rhythm” in Persephassa, and the last on the “thousand colours” of Pléïades.

Finally, the last and shortest chapter is devoted to the sixxen, an instrument invented by Xenakis expressly for the performance of Pléïades. The name of the instrument, the booklet explains, comes from the number six [in both French and English], in reference to the percussionists of Les Percussions de Strasbourg, who at that time – and for a long time – were six, and from the first three letters of Xenakis’ surname. The sixxen consists of nineteen metal plates of different pitches that are not tuned in any diatonic or chromatic scale. In fact, each of the six sixxen constructed, one for each percussionist, are tuned slightly differently to avoid any possibility of “unison” by mistake.

As for the CD, it includes a new recording, made last July, of these two basic works of Xenakis’ percussion repertoire, which, according to the former artistic director of Les Percussions de Strasbourg, Jean Geoffroy, was “an exceptional encounter between a composer and a group of performers”.

In Persephassa, Geoffroy explains, “the performer is an element of relentless mechanics, subject to a controlled structure”, while in Pléiades, the performer is “the protagonist of events, embodying them and carrying them in this inexorable movement that pushes us forward”.

What makes Xenakis one of the figures of contemporary classical music most appreciated by new generations is that he was a master at making musicians make a lot of noise. Deeply organised noise, naturally, but in terms of timbres, textures and dynamics one could hardly expect more variety than he provides.

Persephassa builds on postulates of Varèse and Cage in a work whose combination of freedom and discipline is that of someone who has been known to use mathematical formulae for music-making, while Pléïades could be seen as his answer to Steve Reich’s Drumming, even though Xenakis’s explosive energy is a world away from Reich’s quiet incremental change.

In Persephassa, the musicians have a plethora of instruments at their disposal: bass drums, tom-toms, woodblocks, gongs and whistles, among others. And when the musicians bang their drums, fortissimo and in unison, the sound is something like that of a steel mill at full blast. But the work – named after Persephone in Greek, the queen of Hades and goddess of springtime renewal – also has its subtle moments. From tinkling to thunder and from thunder to silence, as in spring itself.

The score of Pléïades, meanwhile, is elaborated in four movements, and explores specific types of sound (mixed timbres, brass, keyboards and skins) in a mixture of twists and turns and straight lines, with persistently repetitive sections offset by unpredictable bursts and sudden changes of direction.

Each of the four movements calls for a different type of percussion. Claviers [keyboard, in French] is written for percussion instruments with tonal sounds: vibraphones, marimba, xylophone and xyloorimba, which consist of a series of percussive bars arranged like a piano keyboard. Peaux features instruments with skins, such as tom-toms, bongos and drums. Métaux requires each player to play the sixxen. In Mélanges, all instruments are used and the result is a stimulating mix of sounds with a myriad of perspectives. The whole piece is an absolutely absorbing sonic journey.