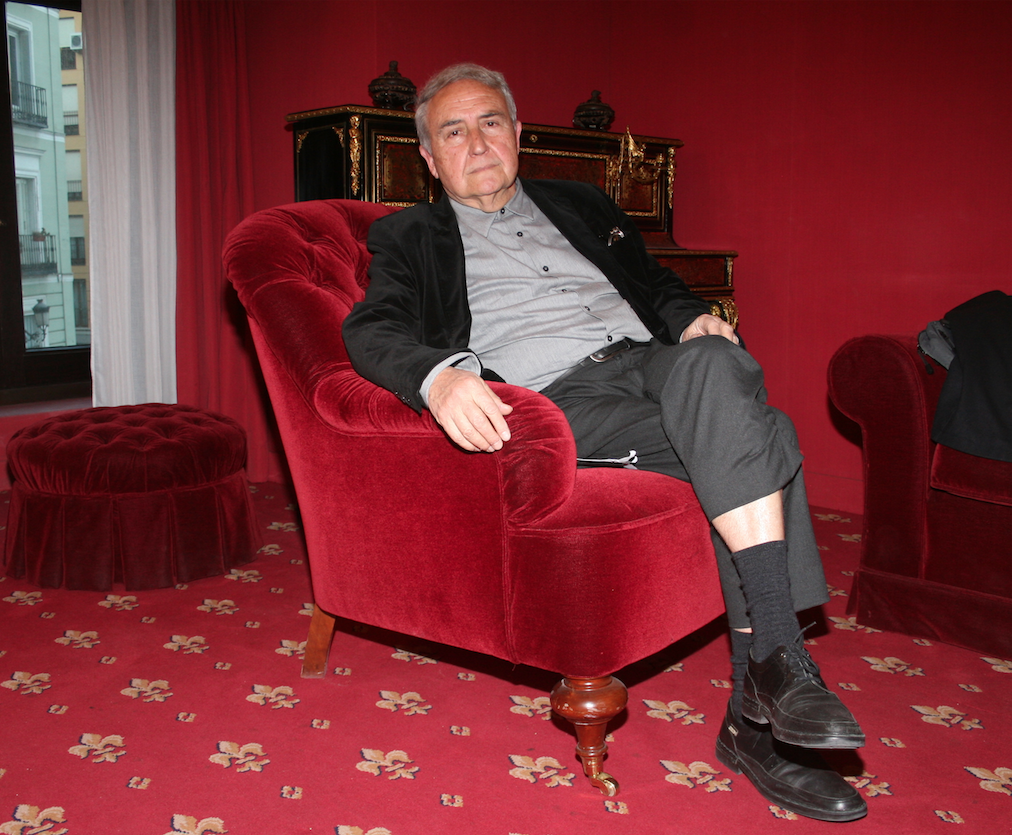 The press conference to present the world premiere of El abrecartas [The Letter Opener], the sixth opera by Luis de Pablo, who died last October, took place yesterday, Thursday, in the Gayarre Hall of the Teatro Real. The opera will be world premiered on Wednesday 16 February, with another five performances on 18, 20, 22, 24 and 26 February. The latter, according to the Teatro Real’s Artistic Director Joan Matabosch, will be broadcast live on the My Opera Player platform and will subsequently become part of its catalogue. Today I publish the second part of the interview conducted seven days ago with the novelist, poet and playwright Vicente Molina Foix, author of both the novel on which the opera is based and its libretto, talking about the other works he shared with the Spanish composer.

How did you meet Luis?

I arrived in Madrid, when I was 17 or 18, to study philosophy at university, and one of my classmates, Virginia Careaga, told me I had to meet her boyfriend, Félix de Azúa, who was a poet. They already had musical inclinations of their own, which I didn’t have, and they invited me to contemporary music concerts. I didn’t know Luis yet, but I did know of his existence, because he was one of the organisers of the concerts Virginia and Félix went to. I met him several years later, at the premiere of his first opera, Kiu, two or three years after my return from England, where I had been living for eight years. The one who introduced us was José Luis Gómez, the actor and theatre director, and Luis told me that he had read some of my novels, and that was the end of that first meeting. But a few months later, in a summer course at the University of San Sebastián, a course on film and music was scheduled and we met again. On that occasion, at a dinner, we talked more. And that’s when I said that I’d like to write opera librettos…

Luis didn’t say anything then, but a month later he called me and told me that if I wanted to, I could write one. And that’s how El viajero indiscreto came about…

How is it that you wanted to write opera librettos?

I’m a curious writer and I like to turn curiosities into realities. I started going to the opera during those eight years I lived in England, and I realised that operas have gone down in history for their music, even though in many cases the librettos were very weak. Baroque operas that we all admire have very uninteresting librettos. But there are also operas with wonderful librettos. Monteverdi worked with the most exquisite poets of the Renaissance. The ones I was most interested in were those of the 20th century, because they were the ones I saw closest to me: Hugo von Hofmannsthal, who worked with Richard Strauss or André Gide or W. H. Auden with Stravinsky. That is to say: there were writers whom I admired very much, as poets or novelists, who had also written opera librettos. Like Ingeborg Bachmann, who comes to mind now. I became fond of those operas whose literary authors I knew. And I thought of them as an example. In fact, my great passion for Richard Strauss, for example, comes from the fact that he worked with Stefan Zweig, with Hofmannsthal, etc., and there is correspondence between the two of them which are fascinating books, in which their discussions appear.

I, on the other hand, never argued with Luis. Working with Luis as librettist was one of the most pleasant and satisfying things, because he was not someone like Strauss, who crucified Hofmannsthal so that he would do things that the other didn’t like… Luis was excessively kind and offered me the chance to realise a dream that I thought was not easy to achieve, because in Spain, at that time, there were hardly any operas being made…

Then they did. At the end of the eighties, Guillermo Heras, who took charge of the Centro Nacional de Nuevas Tendencias Escénicas, commissioned five operas from young composers, some of them disciples of Luis. One of the librettists, who was not yet as famous as he is today, was Antonio Muñoz Molina, who wrote the libretto for an opera by a composer from Granada, José García Román [El bosque de Diana, in 1990]. And I saw that opera. I also saw another, with a libretto by Leopoldo Alas [Sin demonio no hay fortuna, by Jorge Fernández Guerra, in 1986].

And it was Luis who paved the way with Kiu, and has continued to do so, you see, until today…

Where did the ideas for El viajero indiscreto (1988) and La madre invita a comer (1992), the first two operas you did with Luis, come from?

They were my ideas. When we met for the first time to talk seriously about opera, I knew that he was an avant-garde composer, but that he knew perfectly well the whole history of music and the whole Spanish tradition. And I told him that in the libretto there would be literary quotations from the past, so that he could do the same musically.

I showed him the outline of a little story: a maternal-filial tragicomedy, about the influence of parents on their children, a subject that has always interested me. A whim he granted me was that there should be a character that was resolved with the voice of a countertenor, that of the old castrati, which was a type of voice that had attracted my attention in the operas I had seen in England, especially with Alfred Deller.

I don’t remember all the details, but I remember that in the talks with Luis, the character with the countertenor’s voice was going to be a robot, because the libretto has something of science fiction and back to the past. The two female characters there are, one represents the past and the other the future. The truth is that I had total freedom.

La madre invita a comer is a shorter play and it turned out to be rounded. It is a continuation of El viajero indiscreto. It is an exempt work, but I wrote it as a continuation, with a buffo libretto. And there is even a third part that is unpublished, La luna del desenlace, which I wrote to close the saga of El viajero…, with the same main character. I don’t think Luis was inspired by that libretto. But I, however, think it is my best one. And so did Gustavo Tambascio, who was the stage director of La madre invita a comer in Spain.

La madre invita a comer was commissioned by the Venice Biennale, where it premiered, but with a very poor staging and regular musical direction. For the premiere in Madrid, at the Festival de Otoño, the whole production was changed and Tambascio was in charge of the staging.

I understand that there were other texts of yours for vocal pieces by Luis de Pablo. What is it about?

It was, in fact, the first thing we did, before we did El viajero indiscreto. I had premiered a play called Los abrazos del pulpo at the Olympia theatre. It’s a play I don’t like any more, but it had a wonderful cast: Julieta Serrano, Lola Gaos, etcetera. And that play had stage music and Guillermo Heras commissioned it directly from Luis, because I still didn’t know him very well.

Later I did some variations on some verses by Fray Luis de León called Variaciones de León, and Luis made music for five voices singing a cappella. I have it on tape.

I want to remind you that I met you one day, at the beginning of the eighties, at the Círculo de Bellas Artes: you were giving a commented audition of a work by Philip Glass, Einstein on the Beach…

That was, precisely, a cycle programmed by Luis de Pablo. We already knew each other and he asked me to give a commented listening, which he knew I couldn’t do in a technical way, because I have no studies or knowledge. However, I have listened to a lot of music and I have been to many concerts and operas and I had had the opportunity to see Einstein on the Beach and it seemed to me that it was the right thing to do. It is the first great score of musical minimalism, which later has had many imitators and continuators everywhere.

Luis didn’t like this music, but he thought it was good that it was represented in that cycle. I don’t even remember what I said. I was very young at the time and I thought I was “up to date”. The appearance of Einstein on the Beach really marked an era. And by chance of life, I later became friends with Bob Wilson, with whom I worked in Spain afterwards.

The amazing thing (and hats off to him) is that, not liking Philip Glass, he allowed it to be included in the cycle. Or that he personally included Steve Reich and John Cage, whom he didn’t like either, in the programme of the Encuentros de Pamplona, which he had done some ten or eleven years before…

Luis was a very respectful and very shy person, but he would jump up and down when someone expressed contempt for music without any basis. He didn’t jump because someone said his music was bad, but when reckless judgements were made, because he was an absolute scholar. He liked Arnold Schönberg, Luigi Nono and his contemporaries.

Luis has composed a vast oeuvre and I think he has left ten unpublished works, after he finished composing El abrecartas in 2015 and until 2021, which is when he began to be ill.

© Photograph by Jesús Rodríguez Lenin taken in one of the small rooms of the Teatro Real in Madrid.