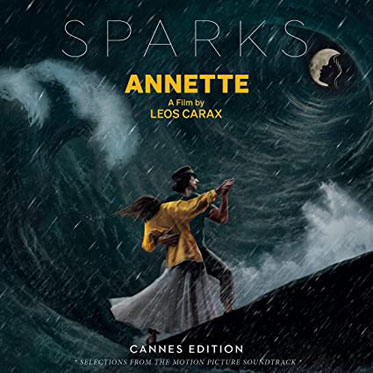 Boundaries are there to be crossed. Sparks, the American rock band led by brothers Ron and Russell Mael that emerged in Los Angeles in the early 1970s, first entered the realm of what might be considered “new opera” in 2009, when they created The Seduction of Ingmar Bergman, initially in radio format: a 64-minute play for Sveriges Radio, Sweden’s national public radio, about the Swedish film and theatre director. Combining a wide variety of musical styles and full orchestral backing, the work was eventually performed live and had its world premiere on 25 June 2011 at the John Anson Ford Theatre in Hollywood as part of the Los Angeles Film Festival. With that experience as a starting point, the Mael brothers wrote the script for Annette, a new musical experiment, closer to an operatic format – and not a rock-opera in the style of The Who’s Tommy or Jesus Christ Superstar – than to a regular rock album. The original story of Annette, with its music and songs, has been turned into a film by French director Leo Carax and premiered this summer at the Cannes International Film Festival, starring Adam Driver and Marion Cotillard, and now the soundtrack has been released through Sony Music.