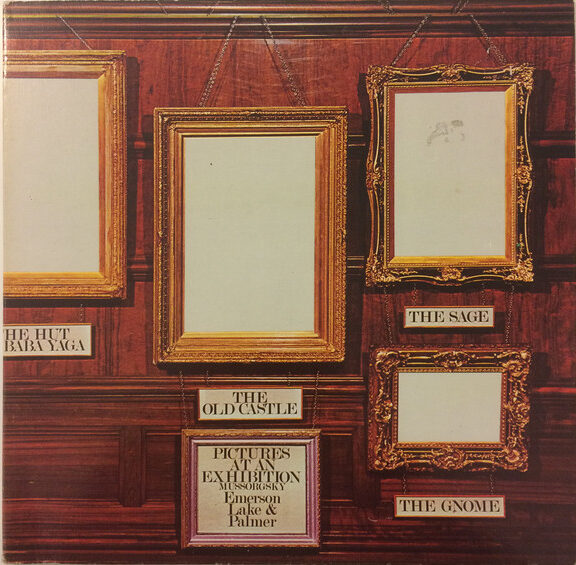 This November marks the fiftieth anniversary of the release of Emerson, Lake & Palmer’s Pictures at an Exhibition, one of the pinnacles of symphonic rock and the ultimate expression of the fusion of classical music and rock.

In November 1971, barely a year and a half after their formation, Emerson, Lake & Palmer was already an internationally admired group. In fact, a “supergroup”, in the terminology of the time, a band made up of musicians who had already achieved success, either separately or as part of other bands. Keyboardist Keith Emerson came from The Nice and Greg Lake from King Crimson. In the search for a drummer, they decided to bring in Carl Palmer from Atomic Rooster.

Keith Emerson’s classical line-up would always stand out as the driving force of this new band: The Barbarian, the opening track of their first album, entitled Emerson, Lake & Palmer, was an arrangement of Béla Bartók’s Allegro barbaro, and another track, Knife Edge, was based on the first movement of Leoš Janáček’s Sinfonietta and the version of Johann Sebastian Bach’s allemande from the French Suite No. 1 in D minor, BWV 812.

Keith Emerson was also obsessed by Pictures at an Exhibition, the piano suite composed by Modest Mussorgsky in 1874, which Emerson had heard at the Royal Festival Hall in London in the orchestral version that Maurice Ravel had made in 1922 and which had made him internationally popular.

This obsession reached the point of wanting to perform a rock version, which the group began to offer live from their second concert. On 9 December 1970, the group recorded and filmed their performance at the Lyceum Theatre in London, but dissatisfied with the sound, they planned a new recording, which they paid for out of their own pocket and finally made on 26 March 1971, at Newcastle City Hall. Their initial intention was to have it released immediately, but their record company refused, claiming it was an almost suicidal commercial gamble. The band was forced to accept the situation, but after a New York station, WNEW-FM, played the entire recording (owned by the band), and the public’s interest in getting hold of it, Atlantic Records released it in November 1971, just a few months after it had been released, Tarkus, which will go down in history as E, L & P’s second album.

The 38-minute disc is not a complete version of the Mussorgsky suite: only arrangements of four of the parts composed by the Russian appear, as well as Promenade, which serves as a link between them, since it was performed as a single piece, in which parts composed by the group were interspersed. The finale of the disc, the encore in the concert, is a version of Tchaikovsky’s Nutcracker.

Its performance, at the time, was daring, and even today it can still be considered not only one of Emerson, Lake & Palmer’s best albums, but one of the best live rock albums ever recorded and a seminal document of the prog-rock era.

seminal document of the progressive rock era, which probably did more to spark interest in Mussorgsky than formal music lessons. Of course, for purists, the soaring sound and many of the instrumental daring (not just acoustics, but Emerson’s pounding electronic keyboards and the clatter of Palmer’s huge drum kit) must have been anathema. Today, listening to it is still appealing and can even uncover nuances that might have gone unnoticed at the time. The longest versions of this album currently available are the version recorded (and originally discarded) at the Lyceum Theatre in London.