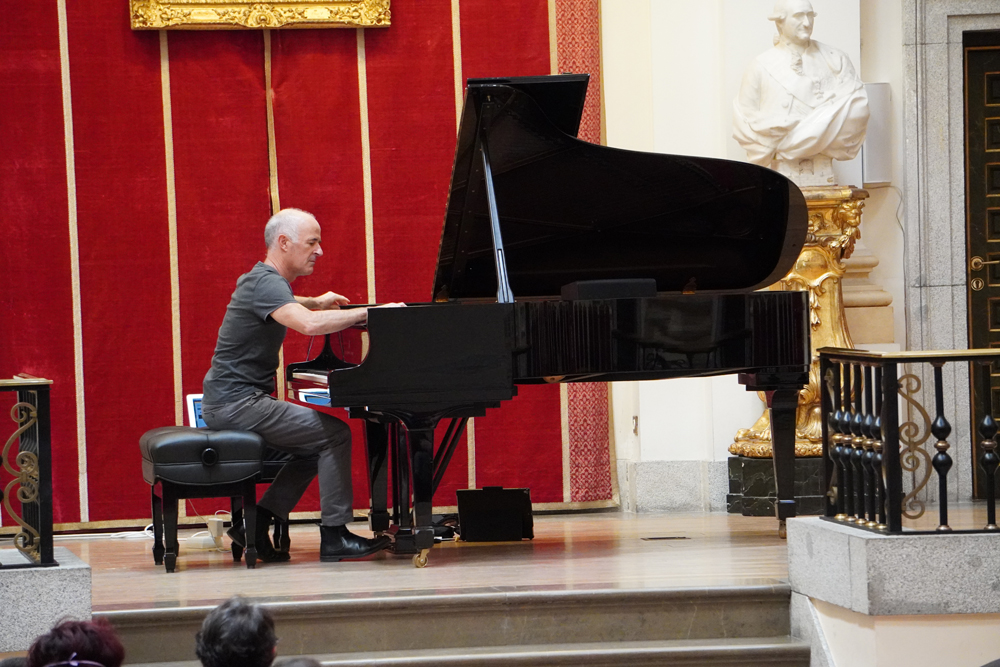 “Concert without a programme” by Ricardo Descalzo, in Madrid’s Fundación Juan March.

The Spanish pianist Ricardo Descalzo (Alicante, 1970) is the guest artist invited this Wednesday, 12 January, by the Madrid headquarters of the Fundación Juan March to offer a recital entitled Concierto sin programa: la escucha imprevista [Concert without a programme: unplanned listening], which will begin at 18:30. The programme warns that “it is an established convention in classical music to announce the programme of a concert in advance, as if the listener needs to prepare for the listening”, a habit that does not exist in other musical genres, such as jazz, pop or rock. The Concert without a programme… thus invites the listener to confront “the unknown”. Reviewing, however, relatively recent performances by Descalzo, on 26 November, in a recital held at the Real Academia de Bellas Artes de San Fernando, the pianist performed pieces by the very young Girona composer Arnau Gran i Romero (Besalú, 2001), the Barcelona composer Josep Maria Balanyà, the Italian Pietro Dossena and the Canarian Gustavo Díaz-Jerez. Before that, on 18th September, at the Alicante Contemporary Music Festival, he gave a recital with several pieces by the late composer Óscar Esplá (Alicante, 1886 – Madrid, 1976); the Chinese, naturalised American, Lei Liang (Tianjín, 1972), the American Christopher Cerrone, or the world premieres of Fragmentos de un discurso amoroso, by Jorge Burillo Ferrer, and Realitatis Occultae, for piano and seaboard, by the aforementioned Gran i Romero. Another example of his eclecticism: in February 2019, at the Conservatorio Superior de Música Óscar Esplá in Alicante, he performed pieces by the Madrid composer Jesús Rueda, such as a selection of his 24 Interludes for piano and Los dos amigos, as well as a selection from the Children’s Songs of the American jazz composer and pianist Chick Corea, who died in February last year. Asked by e-mail if he could give any clues, without revealing anything, the pianist confirmed that “the concert at the March on the 12th is only contemporary music. For many years now I have only played current repertoire”. The concert will be broadcast live on Canal March, YouTube, Radio Clásica (RNE) and RTVE Play. The audio will be available on Canal March for thirty days.

Descalzo is a professor of contemporary piano repertoire at Musikene Centro Superior de Música del País Vasco and has just finished an audiovisual project on the piano works of Sofiya Gubaidúlina, which will be premiered at the next San Sebastián Music Fortnight, with the Russian composer expected to be present.