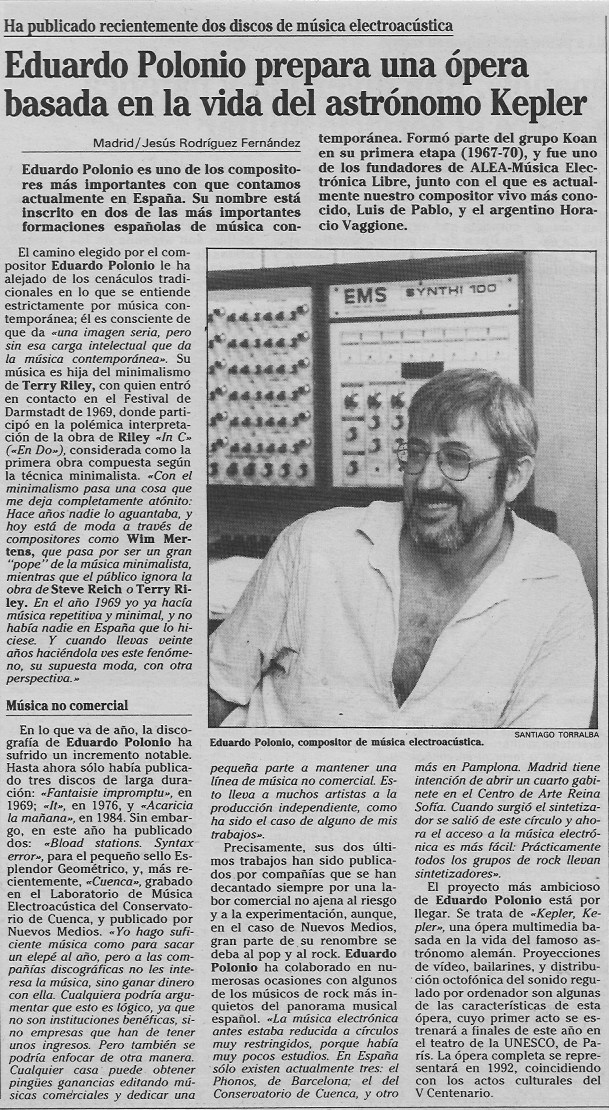 Eduardo Polonio: “In 1969 I was already making repetitive or minimal music”.

On 20 August 1988 I published the following interview with Eduardo Polonio (Madrid, 1981) in the newspaper Ya, to which I was a regular contributor between 1985 and 1991. The opera to which he alludes was neither finally titled with the title given in the article – Kepler, Kepler ended up being titled Uno es el cubo – Fantasía kepleriana en cinco sólidos perfectos – nor was it premiered in 1992, as was supposedly planned, but in 1995. When reading the article, always bear in mind the year in which the interview was conducted.

Eduardo Polonio is one of the most important composers we have in Spain today. His name is inscribed in two of the most important Spanish contemporary music groups. He was part of the group Koan in its first stage (1967-70) and was one of the founders of ALEA-Música Electroacústica Libre, together with our best known living composer, Luis de Pablo, and the Argentinian Horacio Vaggione.

The path chosen by the composer Eduardo Polonio has distanced him from the traditional cenacles of what is strictly understood as contemporary music; he is aware that he gives “a serious image, but without the intellectual card that contemporary music gives”. His music is the offspring of the minimalism of Terry Riley, with whom he came into contact at the Darmstadt Festival in 1969, where he took part in the controversial performance of Riley’s In C, considered to be the first work composed according to the minimalist technique. “Something happens with minimalism that completely astonishes me: years ago nobody could stand it, and today it is in fashion through composers like Wim Mertens, who is considered to be a great ‘pope’ of minimalist music, while the public ignores the work of Steve Reich or Terry Riley. In 1969 I was already making repetitive and minimal music and there was nobody in Spain doing it. And when you’ve been doing it for twenty years you see this phenomenon, its supposed fashion, with a different perspective”.

So far this year, Eduardo Polonio’s discography has undergone a remarkable increase. Until now, he had only released three full-length albums: Fantaisie impromptu, in 1969; It, in 1976, and Acaricia la mañana, in 1984. This year, however, he has released two: Blood stations. Syntax error, for the small label Esplendor Geométrico, and, more recently, Cuenca, recorded at the Laboratorio de Música Electroacústica del Conservatorio de Cuenca and published by Nuevos Medios. “I make enough music to release one LP a year, but record companies are not interested in music, only in making money out of it. Anyone could argue that this is logical, since they are not charities, but companies that have to have an income. But one could also look at it another way. Any label can make a huge profit by releasing commercial music and dedicate a small part of it to maintaining a non-commercial line of music. This leads many artists to independent production, as has been the case with some of my work”.

Precisely, his last two works have been published by companies that have always opted for commercial work that is no stranger to risk and experimentation, although, in the case of Nuevos Medios, a large part of their renown is due to pop and rock. Eduardo Polonio has collaborated on numerous occasions with some of the most restless rock musicians on the Spanish music scene. “Electronic music used to be reduced to very restricted circles, because there were very few studios. In Spain there are currently only three: Phonos in Barcelona, the one at the Conservatorio de Cuenca, and another one in Pamplona. Madrid intends to open a fourth studio at the Centro de Arte Reina Sofía. When the synthesiser emerged, it broke out of this circle and now access to electronic music is easier: practically all rock bands have synthesizers”.

Eduardo Polonio’s most ambitious project is yet to come. It is Kepler, Kepler, a multimedia opera based on the life of the famous German astronomer. Video projections, dancers and computer-regulated orthophonic sound distribution are some of the features of this opera, the first act of which will premiere later this year at the UNESCO theatre in Paris. The complete opera will be performed in 1992, coinciding with the cultural events of the 5th Centenary.