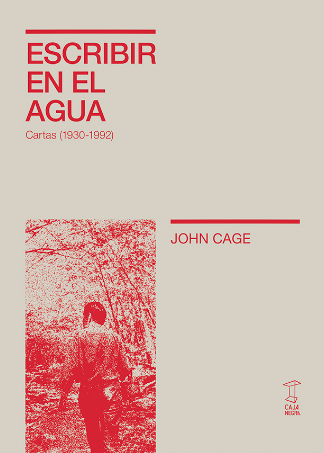 Escribir en el agua. Cartas (1930-1992), by John Cage (Caja Negra Editora, 2021), is a translation to Spanish (by the Argentinean artist Gerardo Jorge, who also wrote the prologue) and a selection of the “selection” that was already The Selected Letters of John Cage (the original volume, published by Wesleyan University Press in 2016). There is no need to insist on the capital importance of the composer John Cage (Los Angeles, 1912-New York, 1992) for the music of the 20th century, but it is worth remembering that to this facet we must add another, no less important one, as a thinker and essayist. His was also Silence: Lectures and Writings (Wesleyan University Press, 1961) – an influential collection of his essays and lecture texts, which transformed the way of listening to music and opened the way to conceptual art – to which this other epistolary selection complements. If the original had 656 pages, this Spanish edition by Laura Kuhn, executive director of the John Cage Trust that preserves the legacy of the Californian composer, comes to a not inconsiderable 470. My complete commentary on this book can be read on the Rockdelux website. The site is free to enter, but you have to register, and allows you to read up to three articles a month.