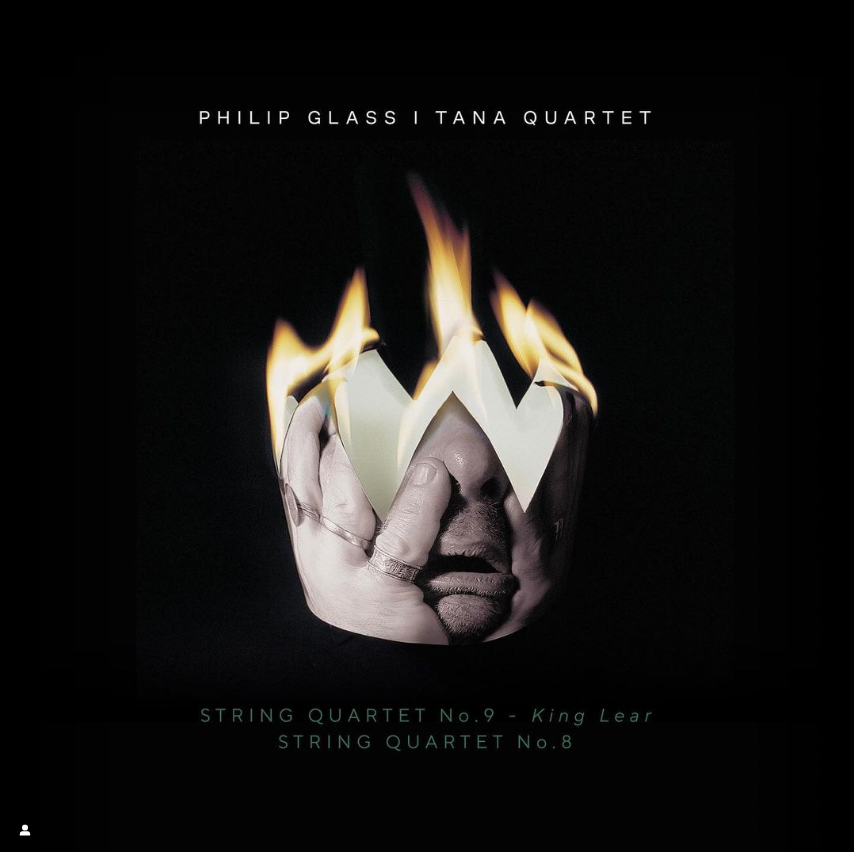 Yesterday, Saturday, the album that the Tana Quartet dedicates to the last two String Quartets composed by Philip Glass, numbers 8 and 9, the former premiered live on 1 February 2018 at Alloway Hall in Winnipeg, Canada, while the latter, christened King Lear, is being released today in Brussels, performed by the aforementioned French quartet Tana, was released on all digital platforms (the physical disc will arrive in the shops on the 28th).

Tana Quartet had already released Philip Glass’s String Quartets, numbers 1 to 7, on the Belgian Megadisc Classics label in 2018, so it was only logical that the ensemble should complete the set with these two new compositions.

The String Quartet No. 8 has the usual minimalist form of three movements, fast-slow-fast, and lasts just over fifteen minutes. Glass himself said at the time that the work adds “a playful, whimsical flavour to the string quartet repertoire, as opposed to its usual solemnity”, and indeed the work is full of vitality and quite lively, at least in Tana’s performance. Although Glass’s characteristic style is characterised by long repetitions of material, in this quartet each idea is repeated only a couple of times before moving on to the next. And it is full of ideas and references to the baroque. In the very slow second movement, curiously incessant melodic lines emerge from minimal fragments, in what is arguably one of Glass’s recent compositions that most harks back to his origins, without the stridency that the average classical listener has struggled to admit.

The chronologically later String Quartet No. 9 is, curiously, the one that opens the disc. This may be because it is largely based on Sam Gold’s production of King Lear, which opened on Broadway in February 2019 (starring Glenda Jackson).

Julie Michael, violist of Quatuor Tana (an ensemble that includes violinists Antoine Maisonhaute and Ivan Lebrun and cellist Jeanne Maisonhaute), asked via her instagram account, confirmed that the piece is based on that theatrical version, “but there are notable differences between the two: the new version has a different orchestration and its parts are performed in a different order, so that it has a more cohesive musical narrative. It is a concert version, rather than a musical background for a play”. In fact, not all of the previous King Lear – which was performed live on Broadway by a string quartet consisting of violinists Martin Agee and Natalie Cummins, Chris Cardona’s viola and Stephanie Cummins’ cello, the same ensemble that recorded the album released by Orange Mountain Music in 2020 – appears on the recording performed by Tana and released by the Belgian record label Soond.

If the original score was to be moulded to the requirements of incidental music, catering to what happens on stage and precluding Glass’s typical large-scale structures – with three pieces sung naturally by British actress Ruth Wilson (as Cordelia) – Tana’s version is structured as a whole, for concert, in five movements, with a total duration of 45 minutes – fifteen minutes less than the “soundtrack” of the theatrical work. The first movement includes slightly more sombre versions of the Overture, These Late Eclipses and Goneril’s House from the 2020 disc, plus two minutes of previously unreleased music. The second movement also opens with previously unreleased music, and then Fools Had Ne’er Less Grace in a Year (one of the pieces sung in the theatre by Ruth Wilson) and links directly to an abbreviated version of Let Me Not Be Mad.

Another Ruth Wilson piece, Winter’s Not Gone Yet, appears, with no vocals, at the beginning of the third movement, which ends with Prayer in the Storm, interspersed with previously unpublished music in between, as does the fourth and fifth movements, in which the music brings the dramatic landscape of this play to life with repetitive structures, quivering harmonies, oscillating rhythms and icy textures, immersing us fully in the dramatic atmosphere of Shakespeare’s original.

In statements made by Antoine Maisonhaute, Quatuor Tana’s first violin, to the French website concertclassic.com, he explains that the String Quartet No. 9 is in fact a commission from Tana to Glass. “We had been in contact with the composer through his publisher; I had already asked him if he would one day agree to compose a piece for our quartet. The Broadway show was not a great success and I think he was quite sad about that. As he had done with his Quartet No. 2 ‘Company’ (1982), which was based on incidental music for Beckett’s play, he went back to his score for King Lear (originally conceived for voice, quartet, piano and double bass) and rearranged it for quartet, resulting in what is now officially his ninth work of the genre, a score that brings a new atmosphere to the quartet corpus”.

This new piece, adds Maisonhaute, “It has nothing to do with the first eight! You can obviously recognize Philip Glass’ touch, this combination of binary and ternary which is his signature of repetitive music, but since we are dealing with very scenic music, there is always a song, a melody. The work has five parts; in the second, third and fourth movements there is a real notion of melody, of accompanied singing: this is very new in Glass’ quartets. Movements I and V show a research on timbres, a little saturation near the bridge to bring out an icy atmosphere that corresponds to the climate of revolt in English society at the time Shakespeare’s play was written. The 9th Quartet is a rather unclassifiable work – which did not fail to confuse us at the outset – a new approach to the quartet which brings a contrast in the output of Philip Glass and shows that the artist continues to evolve in his writing”.