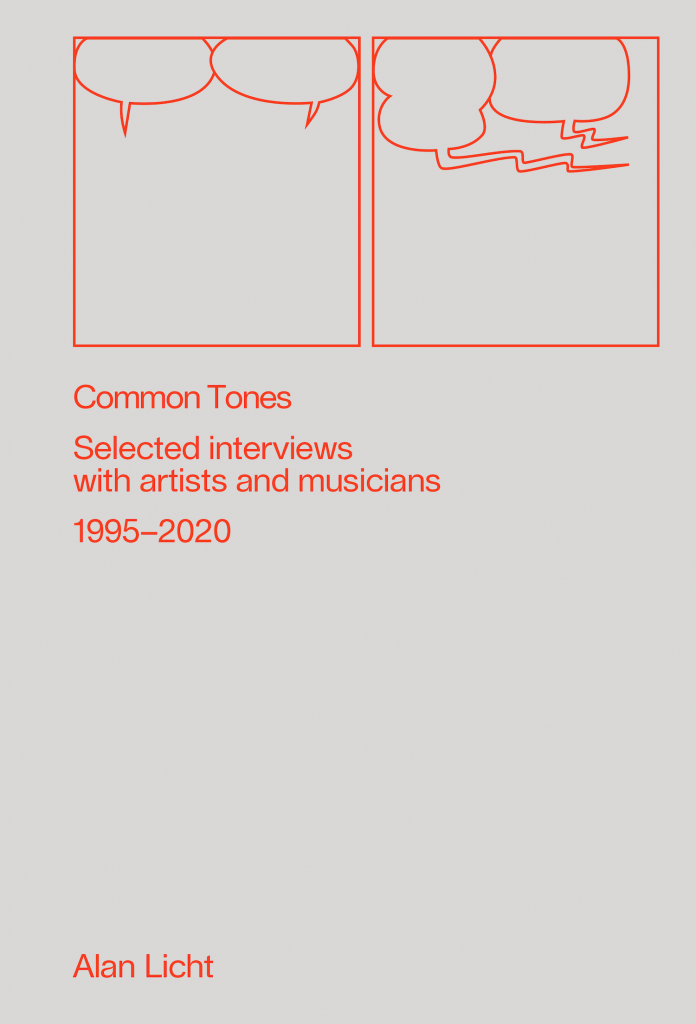 American Alan Licht (New Jersey, 1968) is not only a guitarist, musicologist and composer, but also a music critic and specialist in minimalism. A regular contributor since 1999 to Wire (Adventures in Sound and Music), Licht is also the author of the book Sound Art: Beyond Music, Between Categories (Rizzoli, 2007) – republished in 2019 by Bloomsbury Academic under the title Sound Art – Revisited. It is, precisely, his dimension as a musicologist and composer that makes his texts something that goes far beyond the informative. And that is why the recent publication of Common Tones: Selected Interviews With Artists And Musicians 1995- 2020 (Blank Forms Editions) should be considered an event that will satisfy both the interested amateur and the professional researcher.

The book brings together a selection of twenty extensive interviews (it is a thick volume that exceeds 550 pages: more than twenty-five pages on average…) conducted by Licht for media such as Option, BOMB, Chickfactor or Sight & Sound over a twenty-five year career. That’s why, alongside the names of veteran composers still alive – Rhys Chatham, Henry Flint or Phill Niblock, for example – there are names of artists who died recently – Greg Tate or Milford Graves – or even longer ago – Tony Conrad, Lou Reed, Alan Vega (Suicide) or Glenn Branca (his interview was conducted in May 2016 and was not published, but was carried out live at the Red Bull Music Academy Festival in New York). Both experimental musicians – such as Alessandra Novaga, in what is probably the most recent of the published interviews, as hers appeared on 15 October 2020 in BOMB – and rock figures – Tom Verlaine, Anohni (formerly known as Antony Hegarty, frontman of Antony and the Johnsons), Adris Hoyos (the drummer of Harry Pussy, in what is probably the oldest of the published interviews, as it appeared in Chickfactor in the Fall/Winter 1995 issue), Karl Precoda (The Dream Syndicate and Last Days of May), Ira Kaplan & Georgia Hubley (Yo La Tengo) or The Sea and Cake – or multidisciplinary artists – such as Christian Marclay, Matthew Barney, Vito Acconci (the interview published here was conducted in 2006, but was never published: This is the first time, and in it the New York poet and artist talks about the role of music and sound in his own videos), Tony Oursler, Cory Arcangel and Jutta Koether, as well as writers Rudy Wurlitzer and Richard Foreman, and filmmakers Kelly Reichardt, Ken Jacobs and Michael Snow. Licht himself has also collaborated musically with some of the interviewees.

As can be seen, some of them are not musicians, but the interviews do not deal with instrumental or compositional techniques, but, fundamentally, with “aesthetics”, and it is in this field that all the arts converge. Licht’s interviews are preceded by an introduction in which he situates the moment of the interview and the person being interviewed. And, most importantly, they are never superficial: they bring a deep understanding to each encounter, not only of what the artist has done, but of the environment in which he or she has performed. His own knowledge of the instrument facilitates the relationship, something he brings out, for example, with Lou Reed (in December 2002, to confront Reed on the occasion of the release of The Raven, he asked a colleague for advice, given the reputation of a hostile character with journalists that preceded him, and he told him it was easy: “just tell him that he’s the greatest artist of the twentieth century”) or Tom Verlaine, with whom he played, together with Sonic Youth, in a benefit concert after 9/11.