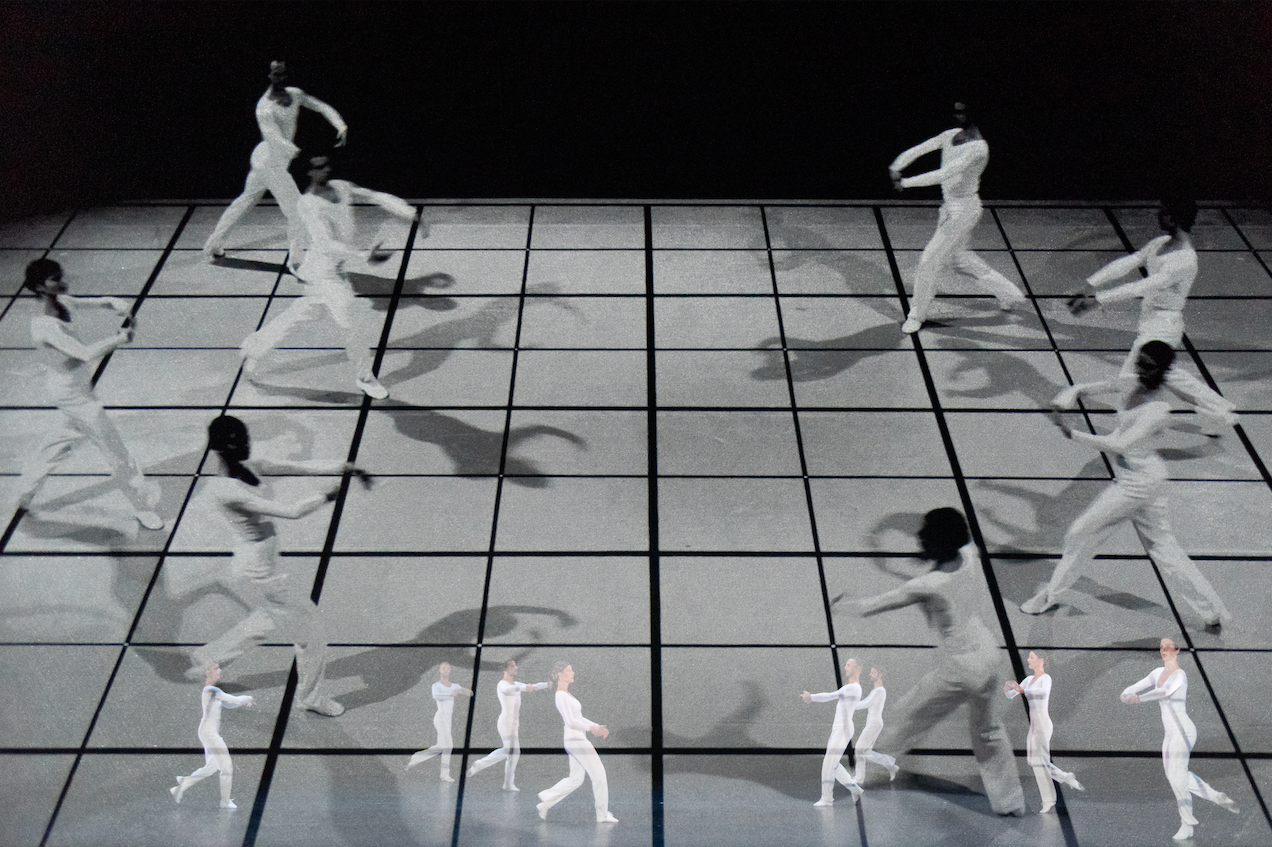 Great evening of dance last night by Lucinda Childs, who offered us her 1979 classic Dance, as the opening of the Dance Reflections festival, organized by the luxury maison Van Cleef & Arpels at London’s Sadler’s Wells.

Fans of Sol LeWitt’s work will know not only its geometric style, but also his preference for the square. More knowledgeable aficionados may also know that he usually uses four colors. And the experts will undoubtedly know that based on these parameters, it establishes multiple variations that generate the different works.

This geometric order, around the square, the four, and the variations that can be established thereby, underlies Dance, the legendary piece by Lucinda Childs from 1979, and helps to understand it better.

The three original creators of the piece, the masters of minimalism Lucinda Childs, Philip Glass and the aforementioned LeWitt, are also seen here accompanied by the formidable dancers of the Opéra de Lyon, of whom Childs confesses to me she is so proud. The square is completed, the poker of aces is a winner.

It was at the opera Einstein on the Beach, by Robert Wilson and Philip Glass, where the latter and Lucinda Childs met. She did a solo there, and it was the first great piece in which she participated. Until then his appearances had been limited to alternative spaces, including the legendary Judson Church.

Thanks to that first contact with Glass and the big theatres, Childs dared to conceive the masterpiece with which she delighted us again last night. When they created it, the three were in full power. They were bursting with creativity, with a very definite idea of what they wanted, with a determined drive to go for it, and with boundless energy and faith. Furthermore, the play is produced in the 1970s; those of maturity of minimalism. In a nutshell, there was a fabulous alignment of stars at the perfect time.

Those of us who already knew the piece had a certain advantage yesterday to understand it well, since it is still very modern, and presents challenges for the viewer. In 2019, the Teatros del Canal, in Madrid, offered us a magnificent double program with the Lyon Opera Ballet, in which Childs’ piece was accompanied by Set and Reset by Trisha Brown, with scenery by Robert Rauschenberg and music by Laurie Anderson.

But, on the other hand, I was worried about missing the capacity to be surprised, especially in a piece that, on the one hand, revolves around repetition and slight variations; and on the other, that it is groundbreaking, and therefore should not be predictable. Quite the contrary, this second viewing allowed me to see new details, better understand the variations and progressions, and especially delve into the perfect merging achieved between music, dance and set design. To better understand, in short, why it is not only a pioneering piece in minimalism, but also a masterpiece.

We enjoy Philip Glass in its purest form, in its fullness, and with nerve and verve. His music introduces a magical, ethereal, floating universe into our brain. Notes interpreted at a considerable speed, evoking abstract landscapes, ethereal, but full of nuances and colors. And that extra speed puts our brain on alert.

The magnificent dancers of the Lyon Opera Ballet act accordingly, moving in a strange balance between weightlessness and the mechanical. They draw lines, parallel, perpendicular, and diagonal, but they also stop sometimes. They appear fundamentally in duets and quartets, but also in solos. The point, the line, and the square. Geometry and symmetry. Repetition and variation. Order and harmony.

One could argue that they seem like pieces of a mechanism in perfect synchrony, and yet we “know” that they feel, that they are people, that they are individuals. They are not machines. A rigor and an order of the kind that we feel is required to aim for a higher goal are perceived. But Childs’s is not a mechanical product, but a human creation: the “Dance”. It’s called that, because that’s what it’s all about, Dance (with a capital letter) in its purest form. For this reason, there is something of simplification in the choreography and the individual movements of the dancers, a eschewing artifice, a search for essence, harmony, and pure beauty. In this sense, the choice of a white wardrobe is perfect for this purpose. Zero distractions. Moving bodies without color.

This facilitates the fit into the whole of LeWitt’s contribution: the scenery. The stage is empty, and the dance is only colored (at first) by the lights. Again the number four: white, blue, red and yellow. Without nuances, and without mixing. Always pure, always simple. We said that the stage was empty; true, as much as a square, actually. However, between the dancers and the spectators there is a very fine transparent screen that allows, on the one hand, to see their work perfectly, but on the other, makes possible Sol LeWitt’s invention: occasionally, but frequently, projecting images of the dancers performing exactly, and in perfect synchronicity, the movements that they display on stage. The obvious option (and it would already have been ingenious and experimental) would have been for said screen to be placed behind the dancers, thus avoiding diminishing their prominence. The film would therefore be a form of “traditional” scenography that would accompany or reinforce the protagonists on stage. However by putting it between them and the public, LeWitt questions what is possible and what is correct, our expectations. In addition, it achieves a hypnotic and cathartic effect, similar to the music of Glass, and the choreography of Childs that accompanies it. Reality (the dancers) moves away from us, and cinematographic fiction approaches us, placing our brain in a state of strange reverie, in which dance, music and images fit perfectly, reinforce each other, and they end up melting. It should be noted that the film was re-shot for this revival by director Marie-Hélène Rebois in 2016, according to what LeWitt did, but obviously now using the magnificent dancers of Lyon Opera Ballet.

An hour of music, choreography, and projected images, which merge around the repetition, and an apparently endless number of variations, so our brain does not stop being stimulated for a minute. A masterpiece that must be seen on every occasion that arises.