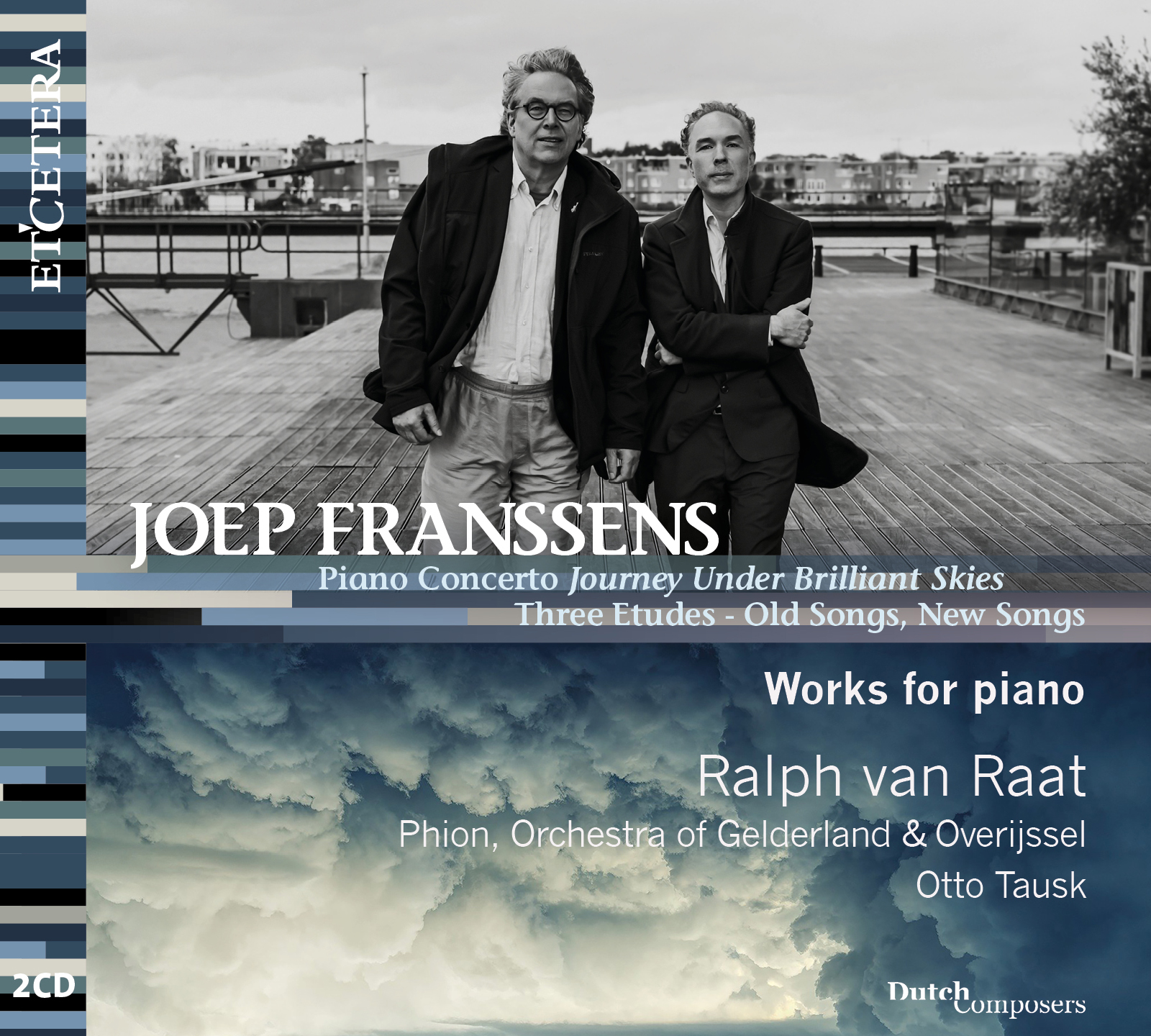 Joep Franssens (Groningen, Netherlands, 1955) is one of today’s leading Dutch composers. A student of Louis Andriessen at the Royal Conservatory in The Hague and influenced by the minimalist generation, he is often regarded as a member of the central European core of the so-called mystical minimalism of Arvo Pärt and Henryk Górecki. Ralph van Raat (Netherlands, 1978) is a leading Dutch concert pianist specialising in contemporary music. With an extensive discography – much of it on Naxos – that exceeds thirty CDs, in 2016 he released on the Belgian-Dutch label Etcetera Records a first album of compositions by Franssens, Piano Works: The Gift of Song, Winter Child. And just at the end of past December, Works for Piano: Journey Under Brilliant Skies, Three Etudes, Old Songs, New Songs appeared again on Etcetera.

The disc begins in reverse chronological order. The first three pieces, about thirty-eight minutes long, are from the piano concerto, Journey Under Brilliant Skies, recorded live in September 2020 in a performance by the Phion, Orkest van Gelderland & Overijssel (Phion, Orchestra of Gelderland and Overijssel, which is the result of the 2019 merger of the Netherlands Symphony Orchestra and the Orchestra of the Province of Gelderland), conducted by Otto Tausk. Next come the Three Studies, from 2019, and the last four pieces are Franssens’ Old Songs, New Songs, dating from 1988.

In fact, Journey Under Brilliant Skies is the revised, definitive version of Franssens’s 2015 Piano Concerto, the original version of which the composer was not entirely satisfied with (in fact, he had already produced a reduced, chamber version in 2016). Franssens says that the average orchestral work has to be repeated five times before it can be said to be completely finished, “and there has to be time between those repetitions, because a composer needs time to move from the stage to the desk. But nowadays a piece like that doesn’t even get a second chance. You have the premiere and that’s it,” the composer complains about the situation in the Dutch cultural world. The Three Etudes, on the other hand, were commissioned from Franssens by the concert pianist Van Raat himself, who will premiere them live at the Amsterdam Minimal Music Festival in April 2019. Franssens explains that he and the pianist “often sat down to work together before the premiere. And after a rehearsal, I would send another forty emails to Ralph. How is that possible with an orchestra? That’s why I don’t write orchestral music any more, but these etudes and works for small ensembles. Because then I can at least have the realistic expectation that they will be performed often”.

An extraordinarily emotional composer, Franssens was inspired by Bach’s harpsichord concertos, in which the presence of soloist and orchestra is integrated in a balanced way, as a starting point for Journey Under Brilliant Skies. Below are parts of the explanatory libretto accompanying the disc: notes written by Ralph van Raat himself:

“Journey Under Brilliant Skies is almost a study of the pianist’s role within the piece. The soloist is the driving force of the ensemble and in keeping with this role his presence is almost continuous, except at the beginning of the second of the second movement, where he remains silent.

In reality, the degree of the soloist’s presence fluctuates constantly. This concept brings about a general fusion of roles, in which soloist and orchestra operate in complete harmony. This is evident from the first entrance of the orchestra: its entrance comes unexpectedly, in the middle of the pianist’s solo, but it does not interrupt or dominate him. The pianist’s cooperative attitude in the first movement is even more pronounced in the second: the soloist leads the orchestra to its outburst and, again, to its demise.

The opening cadenza of the third movement, once again contemplative, followed by a joint entrance of the orchestra and solo pianist, immediately sets the tone for the new relationship between the two. After the orchestra has experienced the pianist’s surprisingly guiding role in the second movement, this is perhaps the most genuine dialogue between the two entities, where they blend together for the first time in the exposition of the melodic theme. Then the orchestra takes the lead, with the soloist playing a much more independent rhythm that becomes increasingly prominent, until, without any prior struggle, there is a completely natural solo eruption that transforms the orchestra into a listener. This solo cadenza exults, radiates and almost screams at full volume; it seems to want to fill the universe with sound and joy. It is an almost transcendental effect, in which the piano tries to shed its own identity.

The Three Etudes are notable for their short duration. Traditionally, the etude is a means for the composer, but more often for the instrumentalist to show his technical virtuosity, often in relation to a specific technical problem. Franssens sought virtuosity at the other end of the spectrum in the first etude: this work is an etude for interiorisation and stillness in sound, a very unorthodox and valuable approach to the genre. The musical, but above all mental, challenge for the performer here lies not only in elements such as beauty of sound and stillness, but also in the total control of energy within a slow tempo, despite the condensed textures. Also striking is the presence of a voice in the shadows which, as if from another dimension, comments on or complements the main melodic line.

In the Second Study, Franssens reveals his experience and frame of reference within the great symphonic thought. The work tells an evocative and stormy symphonic story in the space of six minutes. The listener falls directly into the drama and, through the orchestral writing for the instrument, which suggests the different divisions of the orchestra through the interpretation of different registers, finds his way to the grand and enlightening major turn of the finale. Franssens’ early fascination with Steve Reich’s percussion compositions is reflected in the last etude. The listener seems to be listening to an ensemble of mallet players: the open, resonant, strongly played, vibraphone-like chords are linked by the underlying continuous pulse, as if played by marimbas.

Finally, Old Songs, New Songs is one of Franssens’ earliest works, in which his interest in minimalism is apparent. With the repetition of short musical motifs as a starting point, as well as its continuous pulse and tonal consonance, the work is definitely born out of a fascination with minimal music. However, the framework that the composer has created with these elements goes far beyond the traditional minimalist style; the appearance of the long, expressive melodic lines, which seem to float high above the swirling texture, are also a first indication of a completely new musical direction for the composer. Like the piano concerto, Old Songs, New Songs can be experienced as a subjective journey through time, in which the man’s perception evolves through his experiences. The paradise of the first minutes becomes more and more a drama, in which dissonant and disturbing octaves increasingly contaminate the innocence of the initial musical texture. The music passes through different stages of tempi, density and harmony towards the central section, in which a resigned melody looms in a bed of restless, syncopated rhythm. The melody seems to oscillate like a triplet, but is subtly syncopated with slight accents every two notes instead of every three. The gradual decay of the melody is followed by the ineffable, silence, before the music resumes in a surprising major turn. From here, in a manner typical of his later work, the composer devises a grand structure: a growing and increasingly dense texture seems to breathe new life into the suffocated music. The remains of the building blocks are reassembled, until a great tower emerges again, taller than ever, and becomes a symbol of personal victory. The bright, celestial tolling of the bells announcing the end of this journey”.