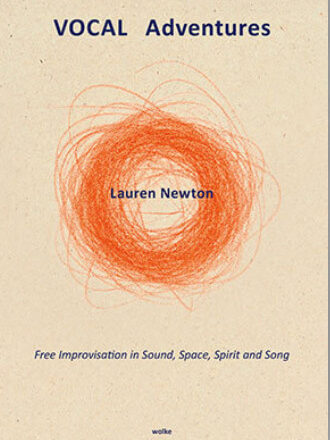 Lauren Amber Newton (Coos Bay, Oregon, 1952) is an American avant-garde jazz and free improvisation singer better known in German-speaking European countries than in the United States as one of the founders of the Vienna Art Orchestra – Vienna’s prestigious jazz ensemble, founded in 1977 and active until 2010, as well as being a guest professor at the Universität für Musik und darstellende Kunst in Graz and holding teaching positions at the Universität der Künste in Berlin and the Folkwang Hochschule in North Rhine-Westphalia. In 2002, she was appointed professor of jazz singing and free improvisation at the University of Music (Hochschule Musik) in Lucerne.

It is precisely her teaching work that interests us at the moment, because just a few weeks ago the German publisher Wolfe-Verlag published the book VOCAL Adventures. Free Improvisation in Sound, Space, Spirit and Song, a book that can be considered a guide for improvising singers, with inspiring lessons and exercises, the result of a lifetime’s work dedicated to vocal improvisation, of which she is one of the main international references, on a par with mythical names of the avant-garde such as Cathy Berberian, Joan LaBarbara or Jeanne Lee.

As she herself explains at the beginning of the book, her vocal adventures began in the German city of Stuttgart in 1975, when she was still working on a master’s degree in classical music. She recalls that she had the impulse to join a jazz-rock band whose musical concept fused composition with free improvisation, “a concept that somehow appealed to me although I couldn’t say why […] It took many years of on-stage experience with numerous musicians for me to begin deciphering and illuminating what I had discovered for myself, the joy of being creative with one’s voice in the context of music”.

Most of what stimulates or inspires a person can be expressed by producing sounds with the voice, whether singing or speaking. A simple murmur or grunt can convey meaning. The voice emits sounds that come from somewhere deeper: an intuition, an expression, a desire, a story or a song with or without words. And any of these can be manifested through music in the form of improvisation. This means that notes or pitches can be very important, but they only achieve meaning or communicate something when they are fused with the desired tone, timbre, emotion and dynamics, which in turn open hundreds of doors to other musical realms.

Vocal Adventures is primarily intended for the singer who wants to venture into that realm, to help him or her delve into the infinite dimensions of the voice’s possibilities, but its experiences can also be useful for all kinds of instrumentalists or, indeed, for anyone interested in broadening their musical horizons.

The book begins with her earliest musical memories, which laid the foundations for what was to become her passion for music, something that became evident at the age of nine, when her father, then 29, decided to pursue a university degree in music education, and classical music was constantly played in their home. But her father’s love of music went beyond that, and he played bass in a jazz band. It was he who made her listen to Flamenco Sketches, one of the pieces from Miles Davis’ Kind of Blue. She expresses the sensation she felt when listening to the notes played by bassist Paul Chambers as follows: “It felt as if he was pushing me on a swing. Each time he played his notes felt like him giving me a gentle shove through the empty space he had left into the mesh of the trumpet’s notes, thrusting me forward into the music and then letting me float backwards”. Thus she had entered jazz, but later, in 1972, in her first year at university, she came into contact with Ella Fitzgerald’s singing and her characteristic scats (singing without words), which mesmerised her.

In the book we witness her transition from studying piano and violin to singing, the discovery of Cathy Berberian’s singing – “expressive, adventurous and humorous”-, Joan La Barbara – “pioneering of unconventional vocal techniques”- or Jeanne Lee, in a video concert with Gunter Hampel’s band – “Their music was far beyond what I normally listened to and Jeanne’s performance was a total surprise to me. It was intense yet light, sincere yet very free! Her way of singing was exceptionally unique and I had never encountered anything like it before”. This is how she discovered the philosophy of free improvisation: “improvised music it’s not just about techniques; otherwise we wouldn’t call it ‘free’ improvisation!” and that there is no right and wrong in improvised music or any creatively driven art form.

And it is now, on page 60 of the 213 pages of the book, that we come to the point where Newton asks the reader: “how do we prepare ourself for this adventure?” and she herself prepares to answer with a series of preparations that begin with a deep awareness – which links with Pauline Oliveros’ “deep listening”: “Look at your hand, at each finger, at their lines. No need to label what you see. Close your hand, open your hand; feel the energy there, the blood pulsing. Breathe in and feel the spaciousness of each breath”. You can continue with the perception of space: “Notice the space between each in- and out-breath. Look at the things around you and notice the space around them. Now look at the space between the objects. Notice that the background of space is always present”. Further: “Sit or stand, take a deep breath, and release a sigh of contentment with your voice – ‘haaaaa’. Repeat the voiced sigh in slow motion. Take another breath and sing a single note over the entire breath length with the same feeling of contentment. Repeat several times, each time with a different note, a different feeling or intention, for example an expression of being surprised, lazy, joyous etc. Notice the difference in your voice’s sound each time”. And she goes on to address improvisational work together, both in vocal groups and in mixed ensembles, with other improvisers, and how to finish: “An improvised piece could be essentially endless,” she says, “but of course we know that the music must come to an end at one point or another, so let’s look at various ways to end an improvisation without the aid of someone giving a signal”, what she calls “intuitive knowledge”.

Scattered throughout the chapters of the book are QR codes that link to visual examples of exercises that can be practised, as well as references to other musicians and composers who are fundamental to understanding the development of improvisation – such as the inevitable John Cage, Fritz Hauser, Derek Bailey, Philip Corner or Anthony Braxton, and names of singers from before -Jeanne Lee, Shelley Hirsch, Phil Minton, David Moss, Sainkho Namchylak, Maggie Nicols or Koichi Makigami- and after -Dorothea Schürch, Greetje Bijma, Ute Wassermann, Guylaine Cosseron, Pamela Z, Franziska Baumann, Lauren Kinsella, Audrey Chen, Charmaine Lee, Clara Weil, Isabelle Duthoit, Sofia Jernberg, Vera Baumann, Urzsula Dudziak, Luca Koch, etc. – who have succeeded in extending the possibilities of vocal music (and vocal music in the field of free improvisation) to infinity.