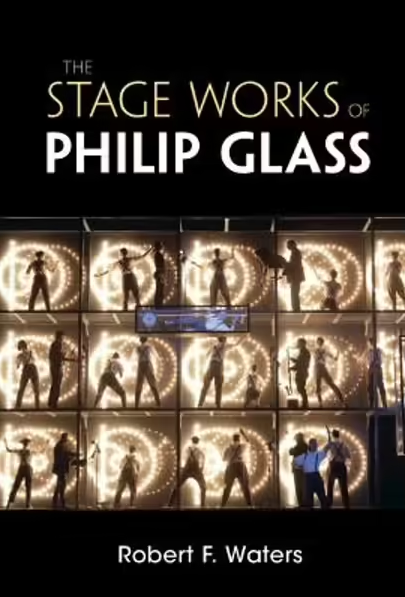 Cambridge University Press has just published The Stage Works of Philip Glass by Robert F. Waters, the first analysis to focus on the American composer’s stage output. Waters is a professor of music at the New Jersey Institute of Technology and Seton Hall University in New Jersey, a former music critic for the Washington Post and a ten-year career as a concert pianist since the mid-1970s, specialising in late 19th-century French music. He has subsequently developed his career as a musicologist since 1981, focusing in the 1990s on twentieth-century American opera, after preparing to teach for the first time a class entitled History of Opera.

His research on American opera led him to prepare a book entitled Twentieth Century American Opera, when he was approached by the commissioning editor of Cambridge University Press, Vicky Cooper, who asked him if he would consider writing a book on the stage works of Philip Glass. It was then that Waters discovered that there were very few books on operas by minimalist composers and concluded that this idea deserved attention, not only when discussing one composer and his operas, but in the context of other composers who were interested in the repetitive structures and stage works composed by these musicians. The result is The Stage Works of Philip Glass, which looks at Glass’s stage works from 1976 to the present day, but does not examine the stage works separately, but has set the chapters according to the shared characteristics of some of the works.

After a long preamble of four chapters in which Waters biographically situates Glass and describes the origins of musical minimalism – with statements by Glass himself or colleagues such as John Cage, Steve Reich or Tom Johnson – and the subsequent post-minimalism, from chapter five (page 72 of the 258 pages in the book) the author begins to examine the influence that various types of theatre (and theatrical authors, from Jerzy Grotowski to Jean Cocteau, via Dadaism or Samuel Beckett’s Theatre of the Absurd, to the present day) have had on Glass’s works – the composer has always considered himself an author of music for the theatre – including his choice of themes and his view of theatrical elements within his stage works, and moves towards the use of multimedia elements in his works, including dance, collaborating with choreographer Lucinda Childs and stage director Robert Wilson, with whom he created his most famous production, Einstein on the Beach (1976). With Wilson he would establish other fruitful stage collaborations: the Rome and Cologne parts of CIVIL warS: a tree is best measured when it is down (1983-4), Monsters of Grace (1997) and The White Raven (written in 1991 and premiered in 1998).

Einstein on the Beach is commonly considered his “first” opera, although Waters explains that there were earlier theatre and music works, such as the version of Samuel Beckett’s Play – which Glass created in Paris with his first wife, theatre director JoAnne Akalaitis, and then revived on their return to the US, when they created together the company Mabou Mines company -, or Music for Ensemble and two Actresses, a 1965 work written for wind sextet and two actresses – Akalaitis herself and Ruth Maleczech – reciting the recipe for a soufflé, showing, in passing, the influence of Dadaism and John Cage. Before Einstein… appeared on the horizon, there were more works premiered by Mabou Mines.

The importance of the book is fundamental, given that the existing bibliography on Glass alone is not very extensive, and is basically confined to a limited period in time, without analysing his stage production in depth. One of the books, Music by Philip Glass (1987), was written by the composer himself, but it only delves into his three “portrait” operas: Einstein on the Beach, Satyagraha and Akhnaten, based on the characters of Einstein, Gandhi and the pharaoh Amenophis IV renamed Akhenaten. With more than thirty other stage shows behind him, it will be understood that reading the book is not only pertinent but necessary. Despite the fact that, as critics have stated on numerous occasions, Glass abandoned early on (in the 1980s) the openly avant-garde language with which he burst onto international stages and concert halls, the fact is that his popularity and his ability to attract new audiences to opera (and similar genres) has grown almost exponentially, with a very long list of collaborators in all kinds of stage projects he has undertaken, The list includes such personalities as film directors Martin Scorsese and Woody Allen and singer Mick Jagger (whom Waters does not mention, as he has not made “stage works” with them, but for whom Glass composed, respectively, the soundtracks for Kundun and Cassandra’s Dream and a song, Streets of Berlin, performed by the Rolling Stone in the film Bent); stage directors Achim Freyer, Richard Foreman and Phelim McDermott; and dancers and choreographers Jerome Robbins, Susan Marshall, Maureen Fleming and Twyla Tharp.