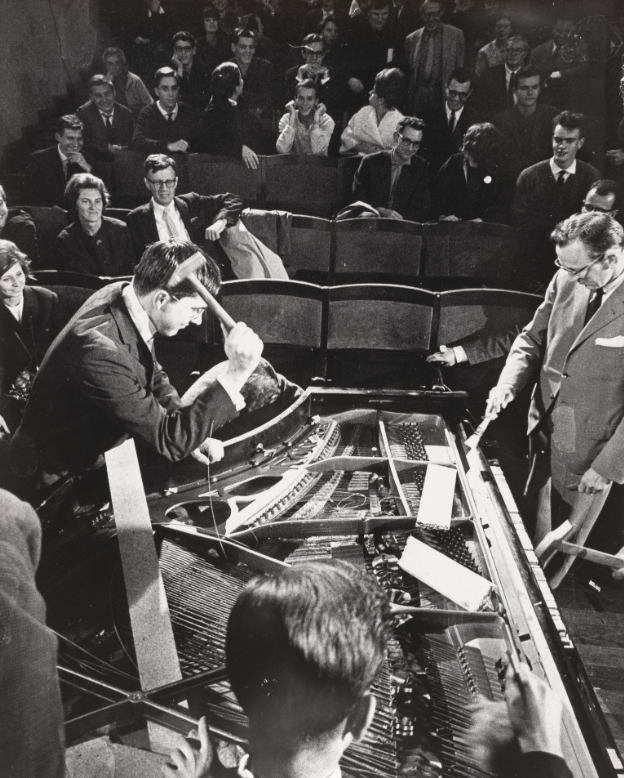 Today marks the 60th anniversary of the famous destruction of a piano at the first Fluxus International New Music Festival in Wiesbaden.

In September 1962, the quiet German spa town of Wiesbaden was shaken by the International Fluxus New Music Festival. For four weekends, the artists took over the Städtischen Museums to strain the concept of music and surprise the citizens of the capital of the state of Hesse.

The opening performance on 1 September proposed a performance of a piece by the American composer Philip Corner entitled Piano Activities, but the version was transformed into a “very free” interpretation, which would become the epitome of the festival. The piece, inspired by the theoretical writings of American John Cage, was to have several performers – students of the composer in his composition class at the New School for Social Research in New York – play a grand piano without using the keyboard… The group of performers, which did not include the author of the work, consisted of George Maciunas, Wolf Vostell, Dick Higgins, Emmett Williams, Benjamin Patterson and Alison Knowles. Over the course of the weekend, they dismantled a grand piano with hammers, saws and crowbars until it was reduced to piles of wreckage, while the audience watched the performance with a mixture of stupefaction, fascination and fear. The performance is considered the founding work of the new art movement called Fluxus.

The rest of the festival was not so spectacular… The concert series included works by several of the founding members of Fluxus (including La Monte Young), as well as international composers such as John Cage, Terry Riley, Pierre Schaeffer, Karlheinz Stockhausen, Richard Maxfield, Dieter Schnebel, Toshi Ichiyanagi, George Brecht and others.

Coinciding with the sixtieth anniversary of the iconic performance, the Wiesbaden City Museum has organised this summer (and until 31 December) a series of exhibitions, concerts, performances, lectures and interventions under the title Fluxus Sex Ties: The Women Artists, which celebrates the anniversary by focusing on the female artists of the movement, with Alison Knowles as one of its best known members, but also Mary Bauermeister, Yoko Ono, the Spanish Esther Ferrer, Takako Saito, Mieko Shiomi, Charlotte Moorman, Judy Dunaway and many other later followers of the movement, such as Guerrilla Girls or the New Zealand composer Annea Lockwood.

The activities of the Nassauischer Kunstverein began on 2 June with the opening of the exhibition Zuvielisation by Mary Bauermeister in the Humorkirche Erbenheim. From Thursday 21 July, the Wiesbaden Museum presents the interactive exhibition Interventions/Fluxus. Mieko Shiomi, open until 25 September. The Kunsthaus Wiesbaden commemorated the 90th anniversary of the birth of the late Korean artist Nam June Paik (Seoul, 1932-Miami, 2006) from 17 to 31 July with the exhibition Cello in an Ice Bath. Charlotte Moorman and Nam June Paik. Other Fluxus events at the Wiesbaden Museum will be Judy Dunaway. Music for Balloons. Soloworks, which will take place on 24 September at 6 p.m., and AdHoc zu Gast im Museum Wiesbaden, on 25 September from 2 p.m. The Gilbert and Lila Silverman Fluxus Collection Gift

The nearby city of Rüsselsheim will also join the Fluxus commemoration with an exhibition, running from 16 October to 22 January 2023 at the Opelvillen Rüsselsheim, entitled Esther Ferrer. I’ll tell you my life.