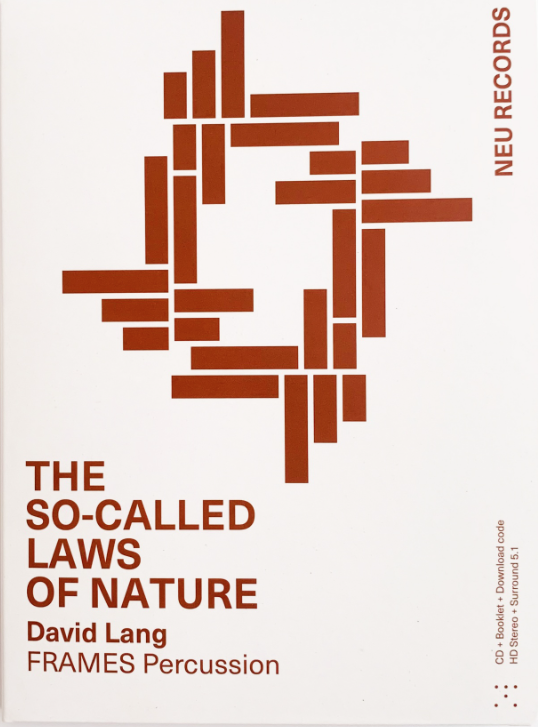 On 19 October 2002, the so-called laws of nature, a request made by Sõ Percussion to composer David Lang, premiered at the Miller Theatre in New York. Lang, one of the three founders of the Bang On A Can collective and winner of the 2008 Pulitzer Prize for Music for The Little Match Girl Passion, composed the work as a way of refuting with the science of music a sentence by the Austrian philosopher Ludwig Wittgenstein in his Tractatus Logico-Philosophicus: “At the basis of the whole modern view of the world lies the illusion that the so-called laws of nature are the explanation of natural phenomena.”

By way of analysis of his work, Lang states that “Because music is made of proportions and numbers and formulas and patterns, I always wonder what these numbers actually mean. Do the numbers themselves generate a certain structure, creating the context and the meaning and the form, or are they just the incidental byproducts of other, deeper, more mysterious processes? My piece the so-called laws of nature tries to explore the ‘meaning’ of various processes and formulas. The individual parts are virtually identical – the percussionists play identical patterns throughout, playing unison rhythms on subtly different instruments. Most of these instruments the performers are required to build themselves. Some of the patterns between the players are displaced in time. Some are on instruments which have a kind of incoherence built into their sound. Does the music come out of the patterns or in spite of them? I am not sure which, but I know that this piece is as close to becoming a scientist as I will ever get.”

The Barcelona-based instrumental ensemble Frames Percussion, founded in 2014 and specialising in American post-minimalist music, has released this summer on the Neu Records label the so-called laws of nature, their version of a work that had already been part of their live repertoire for several years. In fact, the published version corresponds to a recording made at the Auditorio de Zaragoza in July 2015, in which the quartet was made up of Miquel Vich Vila, Ruben Orio, Feliu Ribera Riera and Ferran Carceller Amorós.

In a sense the so-called laws of nature is an extension of the findings of Drumming, Steve Reich’s seminal work, since, as the members of Sõ Percussion confessed to Lang, they were going to include his work in a joint programme with that of Reich. That said, the so-called laws of nature is truly complex and demands a great deal of precision on the part of the quartet in charge of bringing it to fruition, as Lang wanted to compose a “giant” work, which would not be outdone when performed alongside that of the great minimalist master of percussion. In the work, Lang establishes rhythmic and melodic processes with natural or domestic materials and then lets them run their course, with slight but revealing alterations. You think you know where you’re going, but the slightest blink of an eye can change everything. You might get back on track. But it’s also possible that you end up somewhere.

The work is made up of three sections. According to Lang’s instructions, the percussionists play in unison and on the same instruments. In the first section, each percussionist works on seven wooden boards, Javanese-inspired, tuned to a scale. He specifies that the tuning does not have to be complete, but that “the top three notes of each instrument must match from player to player, but then should diverge progressively in pitch and tone – i.e., the middle note of each instrument should be close to the same for each player but the lowest note should be quite different.”

In the second section the percussion is performed on seven tuned metal pipes, and he also explains that “the tone and timbre should be roughly the same within each instrument and among all the players.” Other instruments in this section are three drums and a bass drum with its pedal, these if tuned to the same pitch and timbre for each percussionist, as well as a car drum brake or any other piece of scrap metal.

Finally, for the third section, each instrumentalist has three cups, two tuned pots, three tuned bells, a small güiro and a small wooden board. Lang’s choice of instruments encourages each group to develop their own colours and sounds for this piece.

As requested by Lang, the instruments used by Frames Percussion for the first and second movements (the woodwinds and tuned pipes) were built especially for them by the percussion luthier Dani Guisado, as the group’s artistic director Miquel Vich Vila explains by email, while for the instruments of the third movement “pots, bowls and other objects acquired in establishments such as Ikea or the Garden or Jardiland potting shops were used”.

Lang composed the piece with many overlapping processes, patterns that are affected in a predefined way, in line with his totalistic style, which in Frames Percussion’s interpretation glide fluidly from one point to another, creating a blooming effect.