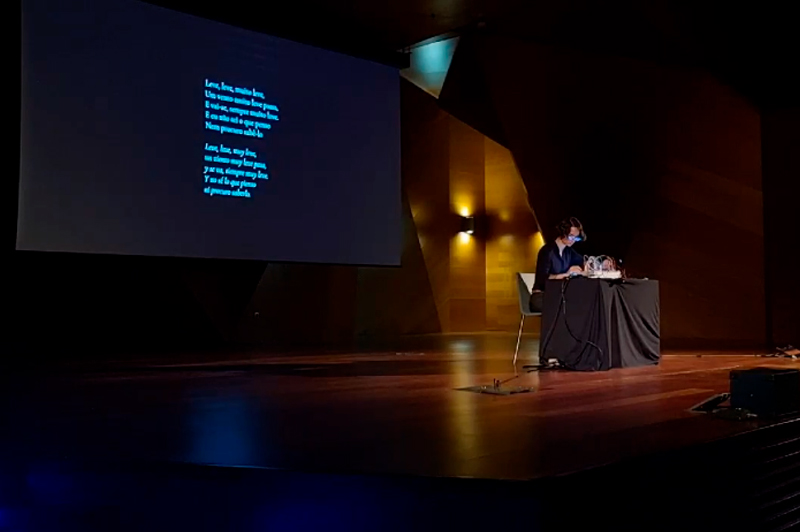 The place where it is not expected. Reflections on «Winterreise».

THE CRYSTAL OF SNOWFLAKES

The title of the recital offered by Clara de Asís on September 29th in the auditorium of the CentroCentro in Madrid is disturbing: The Place Where One Does Not Wait, a place without waiting or hope, where time, mitigated, barely passes, crystallized time, time in a state of hibernation. We hear a slight and fragile sound that in long intervals barely evolves with the addition of another thin sound layer that does not cancel the previous one and that, somehow, remains under the audible threshold. A fascinating effect of virtual simultaneity of sound materials that do not cease, they just stop being heard. Each sound transformation manifests itself as the permanent trace of a forgotten sound that we thought we heard with difficulty.
This fragile musical structure is altered on two occasions: the first, with a clumsy sound effect of water or stream (a sort of thawing), which breaks the balance; and, the second, an electronic distortion, which we believe to be unforeseen, after which, and after a necessary silence, the delicate molecular structure of Winterreise is built again.
Music that, requiring great concentration, needs a climate of intimacy that the auditorium of the CentroCentro (designed primarily for listening) does not provide, both because of the ostentatiousness of the space and the presence of a heterogeneous audience that, in some cases, uninformed about the difficulty of this music, leaves the hall before the end of the concert.
Giving a form to the staging, with a lighting design that directs the gaze or some scenic element that organizes the space, is fundamental to correct the disadvantages of an unfavorable hall or auditorium. Often, non-intervention in the staging, although conceptually neutral, is counterproductive. The mere presence of Clare of Assisi, motionless in the middle of the stage of the clumsily lit auditorium, seated at a table covered by a black cloth, is disappointing: it distracts and negatively conditions the reception of a work that is difficult to listen to. It is possible that the lack of intervention in the staging would not be necessary in an art gallery or in a well-designed small space, where the reception conditions have already been foreseen. But, in this unfriendly auditorium, the design of a staging that concentrates the gaze of the listener, who is also a spectator, becomes essential.
Nor does the inclusion of poems projected in the background on a large screen help much in listening. The reading of these poems disconcerts the listening because they demand a cadence and understanding very different from that of the music. The programmatic “24 sound micro-sections distributed in 8 moments” that are introduced by the poems are, in my opinion, something accessory and incongruent with the perception of a work that is offered as a unit. If perhaps they had an essential importance in the composition of the work, I think they should have been discarded in the performance, and, eventually, recovered after the audition, in a later moment of reflection on the work.