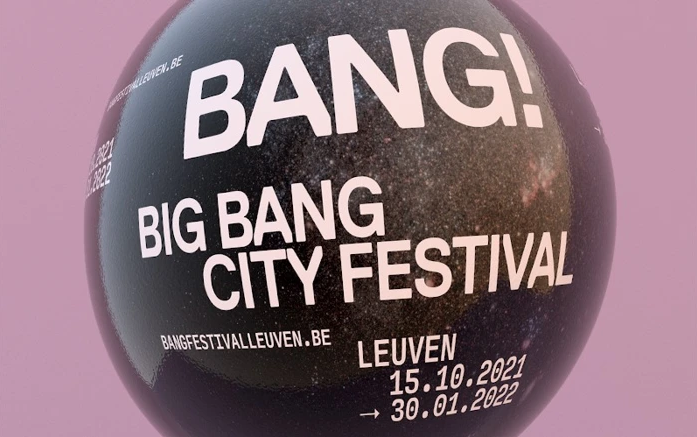 The music programme of the Bang! kicks off.

Leuven is the city where the Belgian priest, mathematician, astronomer and physics professor Georges Lemaître launched his theory of the Big Bang, the “primeval atom” and the expanding universe in 1931 in his class at the University of Leuven. This is what makes Leuven the perfect venue for the Bang! Festival, a three-month cultural event with exhibitions, audiovisual events, conferences and music, which kicked off on 15 October with the exhibition An Eternal Gaze, which explores the human yearning to understand the world and our place in it.
The music part of the event began yesterday at The Dome, an open space in Leuven’s central Martelarenplein square, where until 4 December a selection of immersive, 360° screen and surround sound films by leading figures in contemporary electronic art and music can be seen. The programme includes a collaboration between British electronic musician Darren J. Cunningham (better known by his nickname Actress) and Californian video studio Actual Objects, along with works by Joanie Lemercier and musician Joshua Sabin and Fatima Al Qadiri & Transforma. A new audiovisual creation by Het Depot’s resident musician Victor De Roo in collaboration with Lewi Moors will also be presented.
The Dome will also be the venue today for Ekki hugsa, an audiovisual experience combining the soothing music of Icelandic composer Ólafur Arnalds and the images of Berlin-based designer Torsten Posselt. “Ekki hugsa” is Icelandic for “don’t think”, a message that came to Arnalds just when he needed it most: “A few years ago, I was going through a rough patch in life, suffering from anxiety. One night, some friends took me to an interactive theatre performance to distract me. During the performance, one of the actors looked at me, hurriedly scribbled something on a piece of paper and handed it to me. The message read: ‘Ekki hugsa!’ That instant has inspired most of my work over the last few years”. The audiovisual show (without Arnalds’ presence) premiered in 2019 at the ReeperbahnFestival in Hamburg in 2019 and this is the first time it is being offered again in Europe, in two forty-minute screenings, at 20:30 and 22:00. It will be screened again on 1 December.
Tomorrow, Saturday, it will be the turn of Belgian musician and video artist Antoine De Schuyter, with his audiovisual show Decades, defined as a journey through the cosmos and the big bang through image and sound, from the womb to the tomb, with its crises and calms, with a “sound universe” that oscillates between drone, ambient and techno.
In the coming weeks, the Dome will host shows such as, among others, Stimmung – Karlheinz Stockhausen’s cosmic masterpiece performed by the Dutch collective Silbersee; Cosmic 7 – in which the Pluto Ensemble, directed by Marnix De Cat, performs Renaissance cosmic polyphonies by Josquin des Prés, Orlando di Lasso and Mathieu Gascongne, with 360° projections by the video artist Jaak De Digitale – or Aurora Wounds – by the Italian composer Caterina Barbieri and the artist Ruben Spini, with projections of images taken in the Nordområdene [the “High North”, the Norwegian region between the Arctic Circle and the North Pole].