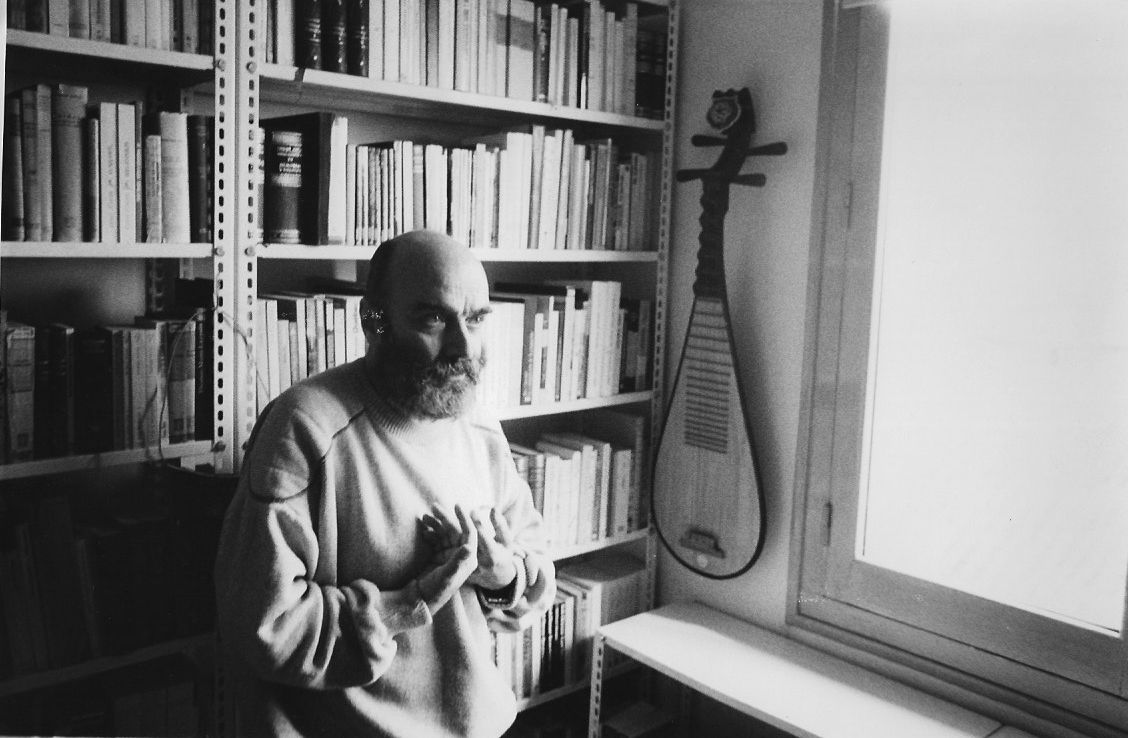 Luis de Pablo: “I compose because it is necessary for my balance”.

In February 1985, a few days after Luis de Pablo’s 55th birthday, and when I was just a novice journalist who had just started writing for what was to be a brief career at the newspaper Liberación, I published this interview with the Spanish composer. The interview took place at his Madrid home in Calle Relatores, a penthouse next to the Plaza de Tirso de Molina. I was accompanied, as photographer, by my then classmate and now friend, the internationally renowned artist Daniel Canogar. Neither of us ever charged a euro for the feature. A few months later, Liberación disappeared. And now, thirty-seven years after the interview, the Teatro Real is preparing to premiere El abrecartas [The Letter Opener] the composer’s posthumous opera, with a libretto by Vicente Molina Foix, on 16 February. The year of production should always be taken into account.

His fame precedes him. Luis de Pablo is already the most important Spanish composer of this century. Perhaps not the most popular, since, as the great Argentinian writer Ernesto Sábato rightly points out, “… rarely is the creator recognised by his contemporaries: it is almost always posterity or, at least, that kind of contemporary posterity which is the foreigner…”.

Luis de Pablo has been for the last fifteen years the most admired Spanish composer, both within our borders and, above all, outside them; his fame, however, remains within the more or less initiatory or elitist limits in which the, wrongly called, contemporary music still finds itself.

In fact, any art that pretends to be the voice of its time will have to collide head-on with the barrier of tradition and custom, which so much mediate man’s tastes. In this sense, and always speaking of importance understood as majority popularity, Luis de Pablo is not our contemporary. He will be our descendants’, just as Falla, Mahler or Bártok are ours.

His music, as they say, is ahead of its time. It is music that is not comfortable to listen to: it demands the listener’s attention and makes him uneasy. It is not music intended as entertainment, but as a method of questioning the existential problems of 20th century life.

Don Luis, what could be the ultimate purpose of your music?

Well… I don’t know! If we are really realistic, the ultimate goal is the disappearance, not only of my music, but of everything. It’s obvious that this earthly spree is not going to last forever. At some point it will end and we will all go who knows where, and there will be no memory of us left.

The less ultimate purpose, in my case, is essentially to provide an outlet for a series of personal needs that I have felt since I was a child, and the only way to achieve this was strictly this, to make the music that I write.

I want to make it clear that an artist, and in general any living being, has a series of needs to cover, of which he does not consider their purpose, but he knows that he has to fulfil them: eating, sleeping, breathing, etc. Its purpose is subsistence.

The artistic creative need is not as peremptory as eating or sleeping, but it is as peremptory as sex. Artists who do not give free rein to their vocation end up paying dearly in their equilibrium and are fertile ground for bad grapes and aggressiveness. Therefore, I compose because it is necessary for my balance. The destiny of my work is totally unknown to me.

From what you say, I deduce that whether or not you are avant-garde doesn’t matter to you?

Of course I don’t. I have been considered avant-garde and I don’t want to go into the appropriateness of this statement. But I can say that, if I have been considered avant-garde, I have been so in the Spanish context, a terribly backward-looking context. In Spain, in the fifties, music like mine was a real trigger. However, broadening the field of vision, in the international context, my art was no more than part of the art of the moment, no more, no less.

My art, like that of most artists of this century, has been (and is) a fiercely personal art. The same goes for Paul Klee, Picasso, Stravinsky or Bártok. Groups have come to close around him.

In any case, the important thing in trying to understand my work is to note that, avant-garde or not, my music was alive. At that historical moment, in Spain you could count on the fingers of one hand the music that could be described as alive.

What do you think of the current situation, of this progressive unification between the spearheads of contemporary music, jazz and rock?

I don’t see this unification anywhere. What I see is that rock and jazz are entering the field of contemporary music in a big way to renew its language; but, with some exceptions, the opposite is not happening, and when it does, it is for illustrative purposes, not for research. This is, for example, the case of Luciano Berio and his work Laborintus II.

On the other hand, what would rock and pop have become if electroacoustic music had not been discovered in the 1940s? Rock has not contributed anything new, but it doesn’t have to. Its destiny is different, that is, to disappear in the short term as an autonomous form. As a Basque, I compare everything to food, and it’s more or less like this: rock is like hamburgers, that is to say, it is not designed to improve music or cuisine. It is not a music of research, and by that I don’t mean to be elitist, because those who dedicate themselves to the deep study of music know that they are condemning themselves in advance to a restricted public.

What we must ensure that this restricted public is not always recruited from the same social classes, and that is where we cannot be elitist; we must give everyone the opportunity to approach all kinds of music.

To give an example, there is no music more elitist than flamenco. A flamenco session at the Bernabéu would be an atrocity. Flamenco is meant to be enjoyed in a room, among five or six friends, and that does not detract one iota from its value.

Artistic creation in recent centuries has always been a minority and anyone who says that Beethoven is popular is lying. He does not realise that Beethoven died in 1827 and the Ninth Symphony was not premiered in Spain until the end of the 19th century or the beginning of this one. And it is still not popular today, even though it was sung by Miguel Ríos. What has that got to do with the real Ninth Symphony?

But to come back to the origin of the question, you can’t deny that there are so-called “rock” musicians who are seriously interested in a musical evolution…

Of course, but that’s not rock any more. The moment they put hake in green sauce in the Wimpy on the corner, the prices will go through the roof and it won’t be a Wimpy any more.

These attempts at musical progression fall out of the rock schema and into the common path of research music. If these musicians – Eno, Fripp, Laurie Anderson, etc. – investigate and break new ground, they are no longer rock, but research music. And serious, in-depth research should be demanded of them.

What do you think of the work of your disciples, such as the Orquesta de las Nubes?

They are very good; they are very valuable people who do excellent work and form part of a radically new phenomenon in Spain, because they present a historical continuity that has not been known for centuries. If we look back, the history of our music presents us with periodic breakdowns. And yet, now – knock on wood – we have gone more than thirty years without such a break.

What I mean by that is that, if you look at what happened with the generation of Albéniz and Granados, musicians came out of nowhere, without a tradition to sustain them. What existed in Spain in those years was zarzuela, and suddenly these gentlemen brought in other airs. Since the fifties that rupture has not occurred, and I hope that no other catastrophe will bring it about.

Finally, tell us a little about your particular vision of the times in which we live.

It’s a time of explosive change, but we don’t realise it. Take the rock phenomenon, for example. Its study is absolutely fascinating, from a musicological and sociological point of view.

Rock was born in the West with an impressive force. At the same time, the definitive death of folklore took place and nobody became aware of it. Today we are left with only remnants of folklore and song, because the mass phenomenon is moving towards rock.

Another fundamental fact is the presence of the mass media. They have had such a brutal impact that they have changed the perspective from which people listened to music. Can anyone think that a French peasant listens to Debussy? That peasant is subjected to an information process whereby he is likely to sing songs. But his children will hear rock. In short, rock has entered the mainstream of popular culture.

Human beings are astonishingly pliable in the hands of a variety of interests. If artistic creation is good for anything, it is to make us aware of our individuality.