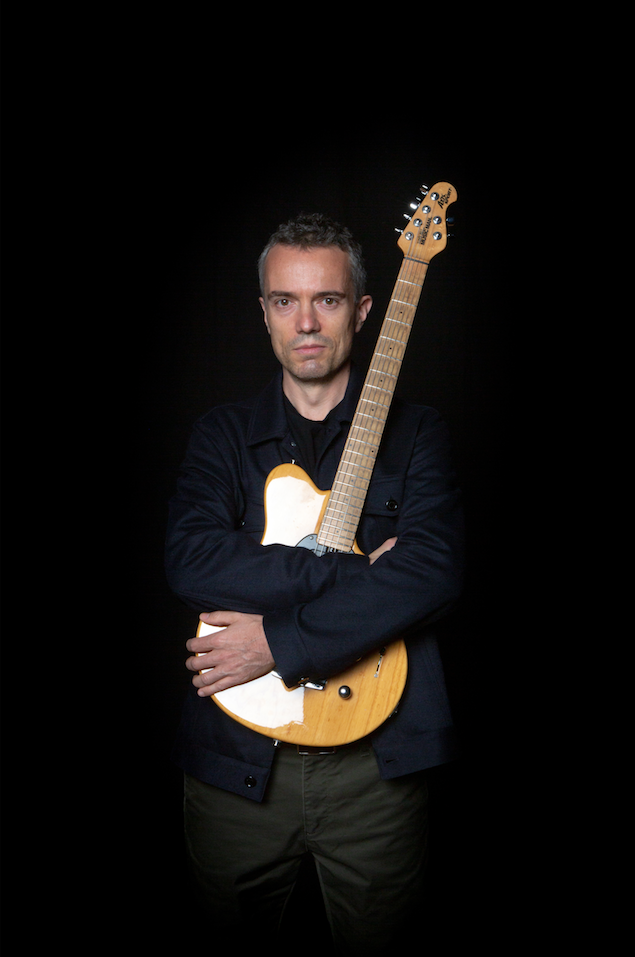 Santi Quintans: “I liked everything about Reich”.

3 October 2021 marked Steve Reich’s 85th birthday. To commemorate the occasion, the record label Megadiscs Classics released the album Guitar Hero. Santiago Quintans Plays Steve Reich, in which the Spanish guitarist and composer Santiago Quintans (Vigo, 1975) performed his own versions of Electric Counterpoint (recorded in 1987 by Pat Metheny and released in 1990 by Nonesuch, together with Different Trains, by the Kronos Quartet) and Electric Guitar Phase (recorded by Dominic Frasca and released in 2001 by Nonesuch on the album Triple Quartet). The tribute album by Santiago Quintans is completed with a guitar version of the piece originally composed by Reich for percussion, Nagoya Marimbas (1994).

A guitarist of very varied influences (from rock to spectral music), Quintans left Spain in 1995, at the age of twenty, to study in Miami, but ended up settling in 2003 in France, where he is developing his musical career and is currently a professor at the National Conservatory of Music in Paris.

According to your website, you were born in Vigo and at the age of 20 you moved to Miami. Can you tell us about your musical training and why you went to Miami and not to Los Angeles or New York, which seem, a priori, more attractive cities for avant-garde music? Or to New Orleans, given your interest in jazz?

I grew up in an environment where music, literature and music were important; at home there were records by Stravinski, Charlie Parker or Bob Dylan. I studied a bit of solfège on my own, but above all I studied with musicians from Vigo (like Cuchus Pimentel, who was my first guitar teacher) who taught me a lot and introduced me to the professional world. At eighteen I was already playing in all the clubs on a regular basis, but I felt I had to go to the roots of jazz and electric guitar and I wanted a solid training. The University of Miami is, although less known in Europe, one of the leading institutions for jazz in the US. Pat Metheny or Jaco Pastorius came from there. And it also has a good composition programme, which was something I was also interested in… Later I have visited and played/recorded in New York and New Orleans, which are places with a lot of history, but maybe not always the right places to lock yourself in a room and study.

Being from Vigo, when you were ten years old, which is when you can begin to show a conscious interest in music, the stars there were Siniestro Total… Were you part of any rock band in your adolescence or early youth? And, on the other hand, how did jazz come into your life? And what is your relationship with contemporary classical music outside the strictly jazz sphere?

The group in the eighties that most influenced me in Spain was, without a doubt, Radio Futura; I still admire Santiago Auserón very much. My first band was called Henry Chinaski, in homage to Bukowski, and in it we played everything… But I still play in a rock band today! Tansky. Here’s the link.

Contemporary classical is, along with free improvisation and jazz, one of my main points of interest. As a guitarist I often collaborate with contemporary groups, such as the Ensemble Offrandes, in Le Mans; but, above all, I am a composer (outside the jazz domain), and my pieces are often played by contemporary groups (in Spain, Vertixe Sonora, from Galicia). My next premiere is in Paris on 12 March, an untitled piece for electric guitar and two percussions [to be performed at the official inauguration of the new Bagneux-Lucie Aubrac station on line 4 of the Paris metro] and in Brazil in April, a trio piece for percussion for the Belém International Festival. My pieces are published by BabelScores.

Apart from making an album in homage to Reich for his 85th birthday, when and how did you discover Reich’s music and what did you like about him?

I met him when I was a student in the US. I liked everything about him, really. It’s music that covers all aspects: experimental audacity, emotional strength, compositional coherence… The fact that his work focuses on rhythm, using tonal harmonies and that his recordings (especially with Nonesuch) are close to pop/rock music makes it easy for musicians of my generation to feel an immediate affinity with his music.

On the album you perform Nagoya, which is originally a piece for marimbas. There is also a guitar version from 2001 by David Tanenbaum. Did Tanenbaum’s version prompt you to include it on your album, or was it something you had already planned in any case?

The Steve Reich album was commissioned by Megadiscs Classics, so Nagoya was their idea. The piece is transposed into another key to better suit the guitar; Tanenbaum wrote a beautiful arrangement for classical guitar. I have allowed myself to play it as if I were a jazzman, treating the guitar as a percussion.

Last year also saw the release of an album by Pierre Bibault on guitar that also consists of Nagoya, Electric Counterpoint and Electric Guitar Phase, released on the French label IndéSens Records. Have you heard it, and can you define how your interpretation differs?

I’ve heard some excerpts from the album. I think the difference is clear: I approach the rhythm like a jazzman, and the recording like a studio musician… Pierre comes more from the school of the classical soloist.

On his website, Bibault explains that Reich “did not validate” his guitar transcription of Different Trains. For your album, did you get in touch with Reich? Did you know him personally? and did he give you any advice on how to interpret his work?

No, I don’t know him personally. I only agreed to record his music from the moment I knew I could do it my way: with the kind of process and sound I’ve been developing in my records for the last fifteen years or so.

Reich (as well as Glass, Riley or La Monte Young) hardly ever appears in the programming of classical auditoriums in Europe. Why is this “disdain” on the part of classical “officialdom” for the “founding fathers” of minimalism?

It is difficult to generalise for the whole of Europe. Reich is played a lot in the UK, and the Cité de la Musique in Paris often does cycles with his music… I think that in certain parts of Europe, the vision of music is still linked to the romantic ideal, the myth of the virtuoso, etc.; Reich’s music represents a more objective vision, post-John Cage. Perhaps it is necessary to be familiar with this tradition in order to give it its proper value.

I don’t know. Reich is an “inventor” and, in a way, more modernist. Glass has certain classical and sometimes even naïve elements that make some of us have a difficult relationship with him.

Are you planning concerts to present the album in Spain, France or elsewhere?

With the cancellations due to covid-19, I’m taking it easy when it comes to concerts… I’ve already premiered the album in Brussels and Paris, and in France there are some dates to be confirmed in 2023. Maybe someone in Spain will read this interview…

If not, on 12 March I’m premiering a great piece for electric guitar and percussion in Paris.

What do you think of the treatment of contemporary music by programmers in Spain? Is it only their fault or is it also the fault of the media, who don’t take the slightest risk and don’t act as disseminators of anything more than the usual?

I don’t know the Spanish scene very well. I only have the impression that in Spain going to a concert is not something very important, and even less so if the concert involves a little effort… Where is the cultural dialogue today? Who do we play for and who listens? I don’t know… I feel lucky to be in France, where there are still spaces for creation.