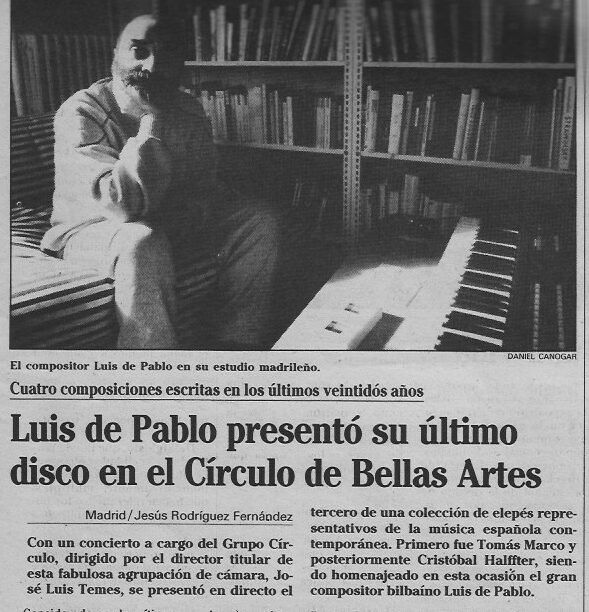 Luis de Pablo: “In general, I listen to these works with satisfaction. I don’t want to be inmodest”.

Today will be the premiere at the Teatro Real of El abrecartas, the sixth and last opera composed by Luis de Pablo, who died last 10 October without ever seeing the work he worked on between 2010 and 2015 on stage. Without having been able to interview the composer from Bilbao to tell me the details of this production, I would like to pay tribute to him by uploading this other interview, published on 13 May 1989 in the newspaper Ya, on the occasion of the release of his album El Grupo Círculo interpreta a Luis de Pablo, a record produced by the guitarist and composer from Cadiz, Suso Saiz, a pupil of De Pablo, and published by the record company Grabaciones Accidentales… the same company that published the records of Duncan Dhu and Sonic Youth at the time. When reading it, bear in mind the date on which the interview took place.

With a concert by the Grupo Círculo, conducted by the chief conductor of this fabulous chamber ensemble, José Luis Temes, the third of a collection of representative CDs of contemporary Spanish music was presented live. First it was Tomás Marco and then Cristóbal Halffter, with the great Spanish composer Luis de Pablo being honoured on this occasion.

Considered by the specialised critics as the second most important Spanish composer of this century, slightly behind Manuel de Falla, Luis de Pablo is, indisputably, the living composer who has achieved the greatest international relevance. The opportunity of this tribute is, therefore, highly justified and appropriate, not only because of the specific weight of the composer’s figure in the Spanish musical panorama, but also because of the real importance of the compositions chosen to form part of this disc, published by the recording company Grabaciones Accidentales S.A., with the collaboration of the Fundación Loewe.

Chronologically, the disc opens with Imaginario I, written in 1967, “a commission from the harpsichordist Antoinette Vischer. It is a very nice piece, almost a divertimento. Its peculiar open form gives it a spontaneous character”. Its author also finds a curious paradox in the way it was written at the time: “The only musician who has no written part (the percussionist, who plays the drums) sets himself up as the conductor of the others, whose parts are entirely written. So the other two percussionists and the harpsichord player – who have all the notes predetermined – are conditioned in the distribution of their sound material by the only one who improvises. It’s easy to make a sociological or philosophical comparison!”.

Ten years later, Oculto was composed, written “as if they were two superimposed works: some more melodic and rhythmic passages superimposed on others that were rigorously rhythmic and inflexible. In other words: behind an apparent type of music, there is another type of music which is ‘hidden’ and which is completely different. Listening carefully to the music, one can clearly appreciate these two textures, or at least I do”.

Dibujos and Tornasol are two almost successive pieces. The first, a reworking of another piano work from several years earlier, Affettuoso, is dated 1979, while the second was produced in 1980: “IRCAM in Paris invited me to write a composition in their laboratories. I opted for a work with pre-recorded tape and a live ensemble of eight instruments. The two elements must be completely fused, so that what comes from the tape and what is played by the live instrumentalists is a single homogeneous mass. These processes were computer-calculated, otherwise it would have been very difficult to play with this interplay of horizontal movements, ascending and descending, each time over different jumps, and so on. Evidently, the title Tornasol comes from this pun”.

Asked about the feeling he gets when he listens to his own works twenty or thirty years later, Luis de Pablo affirms that he never disavows the past. “In general, I listen to these works with satisfaction. I don’t want to be immodest, but I am aware of what they meant at the time as a contribution to the music of those years. Perhaps, what is regrettable is how little these and other valuable music of those years have managed to take root in Spanish cultural life”.