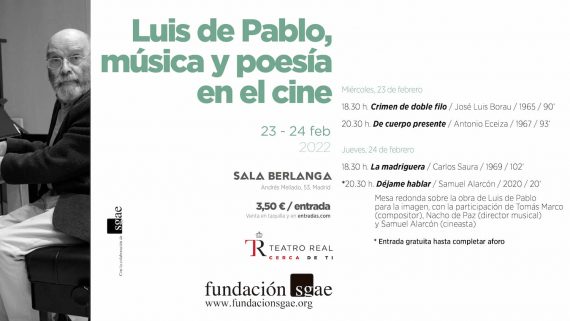 The Sala Berlanga screens a documentary and three films with soundtrack by Luis de Pablo.

The Fundación SGAE joins the Teatro Real in its tribute to Luis de Pablo with the screening, at the Sala Berlanga, of three films with a soundtrack composed by the Spanish musician and a documentary on his figure.

With the title Luis de Pablo, música y poesía en el cine [Luis de Pablo, music and poetry at the cinema], the Sala Berlanga in Madrid (Andrés Mellado, 53) is hosting today, Wednesday 23 February, and tomorrow, Thursday 24 February, the programme of activities. This evening’s one will feature the screening of the feature films Crimen de doble filo by José Luis Borau (at 18:30) and De cuerpo presente by Antonio Eceiza (at 20:30). Tomorrow, one of Carlos Saura’s several films for which De Pablo composed the score, La madriguera, will be screened (18:30), followed at 20:30 by Déjame hablar, the short documentary about the composer – twenty minutes long – which Samuel Alarcón began to make in 2016 and which was premiered at the opening of the Venice Biennale of Music in 2020, in the year in which the composer received the Golden Lion for his artistic career.

After the screenings, Alarcón himself, together with composer Tomás Marco and conductor Nacho de Paz, will take part in a round table discussion on the role of Luis de Pablo’s music in the field of film.