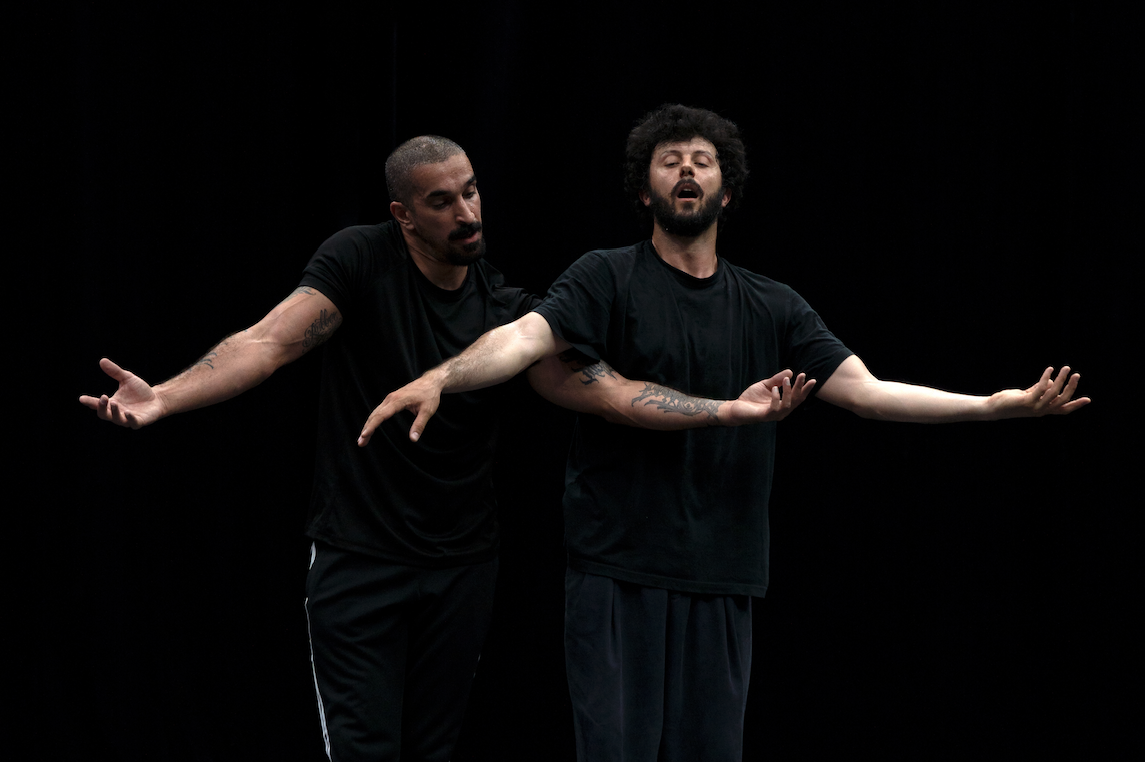 Is it desirable to limit relations with our neighbours to what is strictly necessary? Can you bring together people of different origins in the same space? And what about dancers?

Brigel Gjoka is a prestigious contemporary dancer, Rauf Yasit, on the other hand, is specialized in “abstract” street dance; not in vain his nickname is “RubberLegz” (I think descriptive enough). Two unlikely scenario neighbors, a priori.

It would appear that risky combinations require daring, which may well come from the reckless instinct of youth, or on the contrary, from the self-confidence of a great maestro. It is possible that here we can consider that both circumstances have occurred. On the one hand, it was the young dancers themselves who took the initiative to create this piece, even though their training and experience were so different. However, it was the great genius of contemporary choreography William Forsythe who previously joined them on stage, in an inventive and award-winning piece called A Quiet Evening of Dance (2018). I saw it at the time, and I can confirm that it was a success. In any case, it was this experience that stimulated and aroused enough curiosity in the two dancers to consider this risky collaboration.

Neighbours, what we have seen in the Lilian Baylis Theater (the second room of Sadlers Wells) sometimes reminds us of the observed mixture of languages ​​already used by Forsythe in his above-mentioned piece. I think I glimpse that Forsythe sew the seed of this new creation. In fact, in the piece is credited as “collaboration”. I do not know if said collaboration is reduced to that initial spark, and the consequent recognition of that original starting point; or if he has supervised, corrected, guided, or given any idea for the new creation.

Be that as it may, it is not difficult to perceive the connection with the master, just as (little by little) the own signature of the young choreographer and dancers is revealed.

They appear on stage on a dark stage and begin to dance, without the need for any music. Nothing is heard other than their breathing, and some snapping of fingers whistling. The rest is solemn silence. They are getting to know each other. And not always easily. But we discover that their vocabularies, apparently so different, do not differ that much actually. One approaches the other, effortlessly and with credibility. The differences remain, but they seem to want to learn from each other. Or may they be rather challenging each other? Is it a “battle of the peacocks”, or a game of discovery?

Suddenly something changes. To the left of the stage, the musician Ruşan Filiztek begins to pluck his Armenian duduk [a kind of flute] and his kurdish daf [a frame drum]. The audience’s mind travels with the music, and so do the dancers. Brigel is as flexible as bamboo, he has danced with Forsythe, Silvie Guillem (in her fantastic and moving farewell), NDT, or the Rhine Opera Ballet, but his origins are Mediterranean. Born in Albania. For his part, RubberLegz is a muscular b-boy, lives in Los Angeles, and was born in Germany, but his origins are also in the south, the Kurdish people.

With the music comes the greatest rapprochement between the dancers; complicity and spirituality, both when they dance together and when they perform alone. The Muslim-inspired music and singing, which at times remind us of the muezzin’s call to prayer from the minaret of a mosque, brings them closer physically, aesthetically and spiritually. They travel to their roots, to their traditional dances, to their way of understanding personal relationships, to the origin of dance in (quasi) tribal celebrations, with a smile on their face, a reflection of the purest and most unprejudiced happiness.

The schools and experiences of the dancers are left aside, just as the countries of origin also disappear. And the music, the roots, the spirituality, the group dance, and the creation unite and fuse the human beings underneath all those less relevant layers. Undoubtedly a great lesson in these times in which, supposed leaders, who arrogate to themselves a power that does not really belong to them, intend to confront us with brothers, against our nature and souls.The public understands it, internalizes it, and celebrates it standing up with a long-standing ovation.