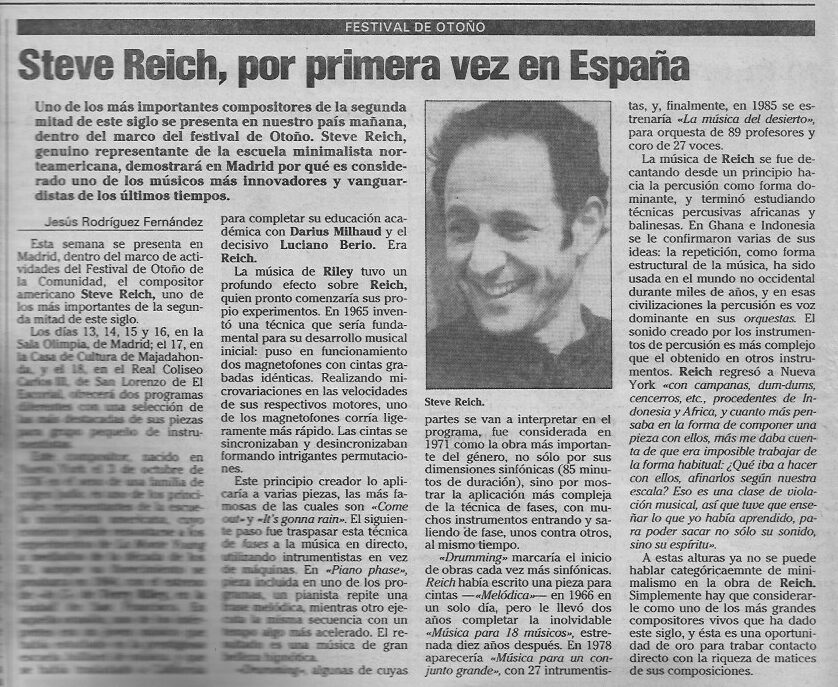 Steve Reich: “Tuning [ethnic instruments] to our scale is a musical violation”.

Coinciding with my review on Steve Reich’s book Conversations I wanted to recall the interview I did with him in 1987, when he visited Madrid to perform at the Autumn Festival. Unfortunately, I was still a journalist and I didn’t ask him the fundamental question: “Is this the first time you’ve performed in Spain? If I had done so, I would have avoided the embarrassment of seeing a headline like “Steve Reich, for the first time in Spain”… I don’t blame myself for not knowing in 1987 that Reich had already been at the 1972 Pamplona Meetings (the Internet, that infinite storehouse of documentation, didn’t exist yet, at least for private use): I blame myself for venturing a guess so lightly.

In any case, these two articles, published two days apart, 13 and 15 October 1987, with slight differences from the talk I had with him at La Casa de la Radio in Prado del Rey, are my small contribution to the Conversations of Steve Reich published by Hanover Square Press and distributed by Harper Collins Publishers.