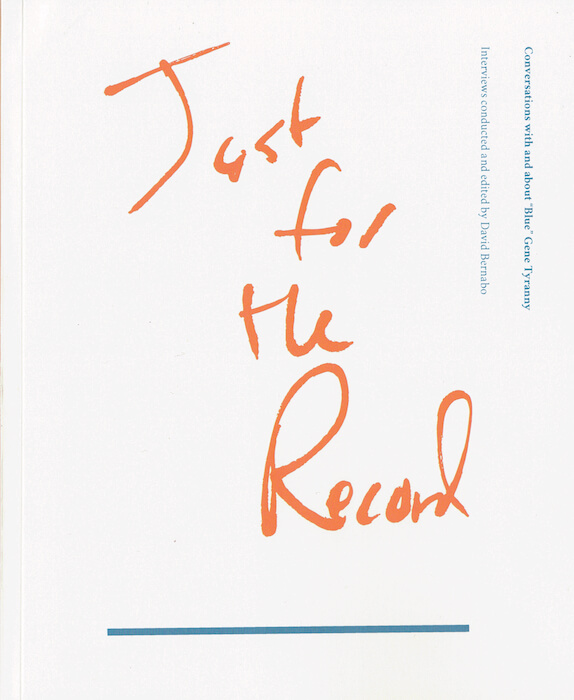 David Bernabo publishes his conversations with (and about) composer “Blue” Gene Tyranny.

American composer and pianist “Blue” Gene Tyranny (San Antonio, Texas, 1945-Long Island, New York, 2020) died on 12 December 2020 of complications from diabetes. He was an extraordinarily eclectic musician, who played with Iggy Pop – they met in The Prime Movers and he later played live keyboard for The Stooges for a brief period in 1973 – as well as with jazz pianist Carla Bley, or became a regular collaborator of Robert Ashley – Perfect Lives, the latter’s television opera in which Tyranny played the role of “Buddy, the world’s greatest pianist”, can also be considered a half-hearted work. In his career, names such as John Cage, Yoko Ono, Pauline Oliveros, Laurie Anderson, Joan La Barbara or Peter Gordon appear and disappear, always in a discreet background that did not have the popular recognition that the magnitude of his work deserved, whether as a keyboardist or as a composer, and both as a pop author – his 1978 album Out of the Blue standing out – and in his more experimental facet – Take Your Time, from 2003 -.

In recent years, however, his name began to be more widely recognised and, as a result of this interest in recovering his figure, the Unseen Worlds label asked him to prepare a six-disc retrospective box set, with pieces spanning almost sixty years of recordings, from 1963 to 2019, which would unfortunately be released a few months after his death, under the title Degrees Of Freedom Found.

Shortly before that, musician, filmmaker, writer and visual artist David Bernabo embarked on making a documentary about him, Just For The Record. Conversations With And About ‘Blue’ Gene Tyranny, which premiered on 9 October 2020 at a virtual edition – due to the covid-19 pandemic – of the Tusk Festival in Newcastle (UK), just a couple of months before its protagonist passed away. Although the documentary was long – 101 minutes – all the interviews conducted by Bernabo with Tyranny himself and people close to him had to be abridged for the video format. For this reason, Bernabo decided to expand the project and publish a book with the same title that collects, at greater length, the interviews from the documentary, with Joan La Barbara, Peter Gordon, Kyle Gann, David Grubbs, Nicole V. Gagné, Philip Perkins, Pat Oleszko, Tommy McCutchon, Jeff Berman and Bill Ruyle, as well as “Blue” Gene Tyranny himself – whose interview is broken down into five parts. “Blue” Gene talks about his life in San Antonio, Ann Arbor, Oakland and New York, including anecdotes about David Bowie’s presence in the Mullholland Drive house where he lived temporarily with Iggy Pop; the recording of Out of the Blue; the circumstances under which he was adopted; and the real origin of the name “Blue” Gene Tyranny, which he chose for himself – sorry: if you want to find out, you’ll have to read the book -; that he didn’t particularly like the minimalism of Philip Glass or Steve Reich – the latter of whom he became sound engineer on a recording; touring with Carla Bley or his Cookie Sunday binge on a short bus trip from Ann Arbor to Detroit to open for Frank Zappa’s Mothers of Invention.

The book can be read not only as a biography of Tyranny – although musicologist Nicole V. Gagné claims, in her interview chapter, that the most interesting musicians of the eighties were “Blue” Gene, Fred Frith, Glenn Branca and The Residents -, but as a journey through the most intense and interesting years of the American musical avant-garde, from the sixties to the eighties, in which names such as Tony Conrad, Charlemagne Palestine, Rhys Chatham and so many other illustrious avant-gardists to whom time and history are indebted.