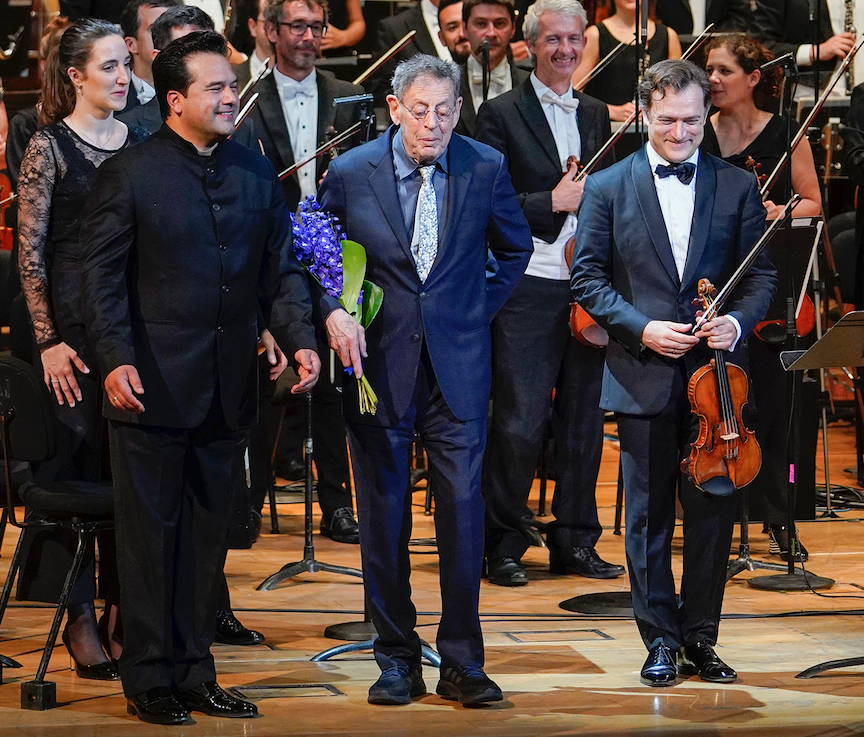 Philip Glass attends the concert in his honour organised in Bilbao by the BBVA Foundation.

Last Wednesday the Euskalduna in Bilbao hosted a concert in tribute to the winners of the fourteenth edition of the BBVA Foundation’s Frontiers of Knowledge Awards. The concert repertoire consisted of An Alpine Symphony by Richard Strauss and the Concerto for Violin and Orchestra No. 1 by the American composer Philip Glass, winner of this year’s awards in the category of Music and Opera. The concert featured the Euskadiko Orkestra and, as soloist, the French violinist Renaud Capuçon, conducted by the American conductor Robert Treviño. Capuçon is a great connoisseur of the piece, which he released for Orange Mountain Music in January 2017, accompanied by the Bruckner Orchestre Linz and conducted by Dennis Russell Davies. It was this same conductor, a friend of Glass, who premiered it on 5 April 1987 in New York, with the American Composer Orchestra and the late violinist Paul Zukofsky as soloist. The violin concerto is one of Glass’s most beloved works, as he composed it with his father, Benjamin Charles Glass, in mind, even though the latter had died some sixteen years earlier. As the composer recalled in the book Glass. A Portrait, written by Robert Maycock: “I composed the piece in 1987 thinking, let me write a piece that my father would have liked […] A very smart nice man who had no education in music whatsoever, but the kind of person who fills up concert halls. They’re the people that keep the whole business going”.

Yesterday, during the Frontiers of Knowledge awards ceremony, Glass announced that he is finishing his Symphony No. 15, a work with text based on the writings and speeches of Abraham Lincoln that “was intended to be a concert work, but it also has a lot of operatic qualities. To tell you the truth, I’m still not sure of its category – symphony? opera? I’m sure we’ll know soon enough”.