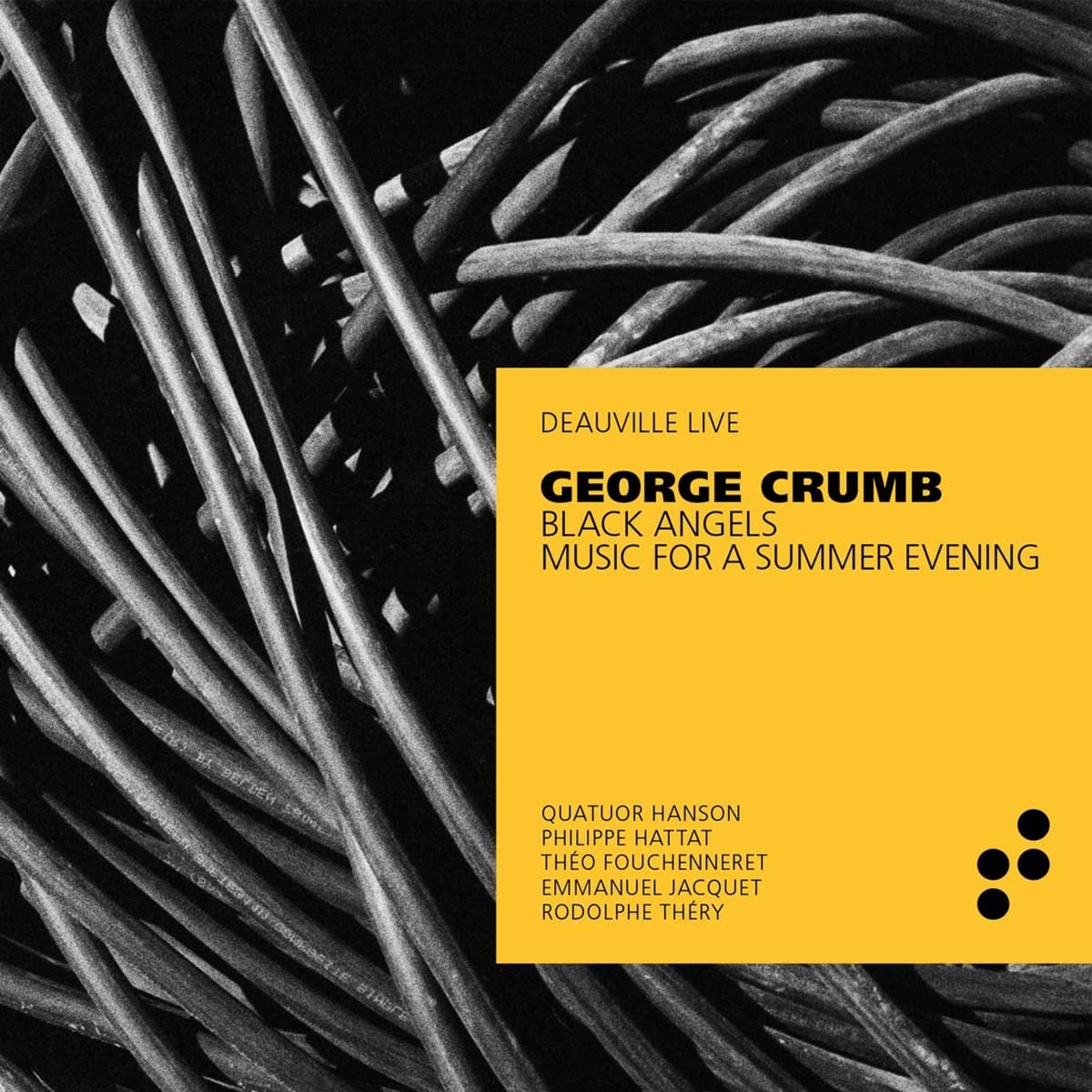 The French label B Records releases “Black Angels & Music for a Summer Evening”, by the late American composer George Crumb.

A few weeks after the death of the American composer George Crumb (Charleston, West Virginia, 24 October 1929-Media, Pennsylvania, 6 February 2022), the French record label B Records released the album Black Angels & Music for a Summer Evening, consisting of live recordings of Crumb’s music performed live last summer at the 20e Août Musical in the French town of Deauville, in the Normandy region.

The order on the disc is chronological: Black Angels is a 1970 piece, while Music for a Summer Evening dates from 1974. The former is a work composed for amplified string quartet and was written by Crumb with the Vietnam War in mind. In fact, the hurtful opening melody symbolises the attack helicopters used as the main instrument of war by the US military. Music for a Summer Evening (Makrokosmos III), for two pianists and percussion and lasting about forty minutes, is an extension of two earlier pieces, Makrokosmos I (1972) and Makrokosmos II (1973), each of which had been composed for amplified solo piano – there was later a Makrokosmos IV, “Celestial Mechanics” (Cosmic Dances for Amplified Piano, Four Hands), completed in April 1979 -.

Crumb himself once claimed that Black Angels should inspire feelings of terror. And indeed, the film director William Friedkin included an excerpt from Night of the Electric Insects – “electric insects” was Crumb’s euphemism for attack helicopters – the quartet’s last movement, to accentuate certain images in his film The Exorcist… On this album, the Quatuor Hanson, founded in Paris in 2013, brings those chilling sensations both in its whistling, supernatural sounds and in its raw, scraping chords. The percussive way of hitting the strings with the bows and the vocalised sounds (especially in the seventh movement, Absence: II Threnody II “Black Angels!”), which range from melody to noise, signal a frightening beauty in Crumb’s attack fragments and clouds of insects.

The tone of Music for a Summer Evening is different. Instead of “images of the Dark Earth”, “Music for a Summer Evening” indicates that the piece will not provoke the terror that the earlier one inspired. Crumb had described it as “more or less atonal, or more or less tonal” and it is in that borderline terrain between the gentle and the slightly twitching (like the song of cicadas) that the work, which has become one of the most widely performed contemporary chamber compositions of the second half of the 20th century, is situated. In fact, the title Mikrokosmos of the entire series (I to IV) refers to the 153 piano pieces composed between 1926 and 1939 by Béla Bartók (the fifth movement of Mikrokosmos III, Music of the Starry Night, is also inspired by Bartók, but in his Sonata for two pianos and percussion).

Compared to a previous recording of the same pieces, released in 2006 by Mode Records – by the Cuarteto Latinoamericano (members of The Carnegie Mellon Philharmonic), conducted by Juan Pablo Izquierdo – the overall sound is more vigorous and mysterious, and conveys all the detail, subtlety, strength and magical atmosphere of these works.