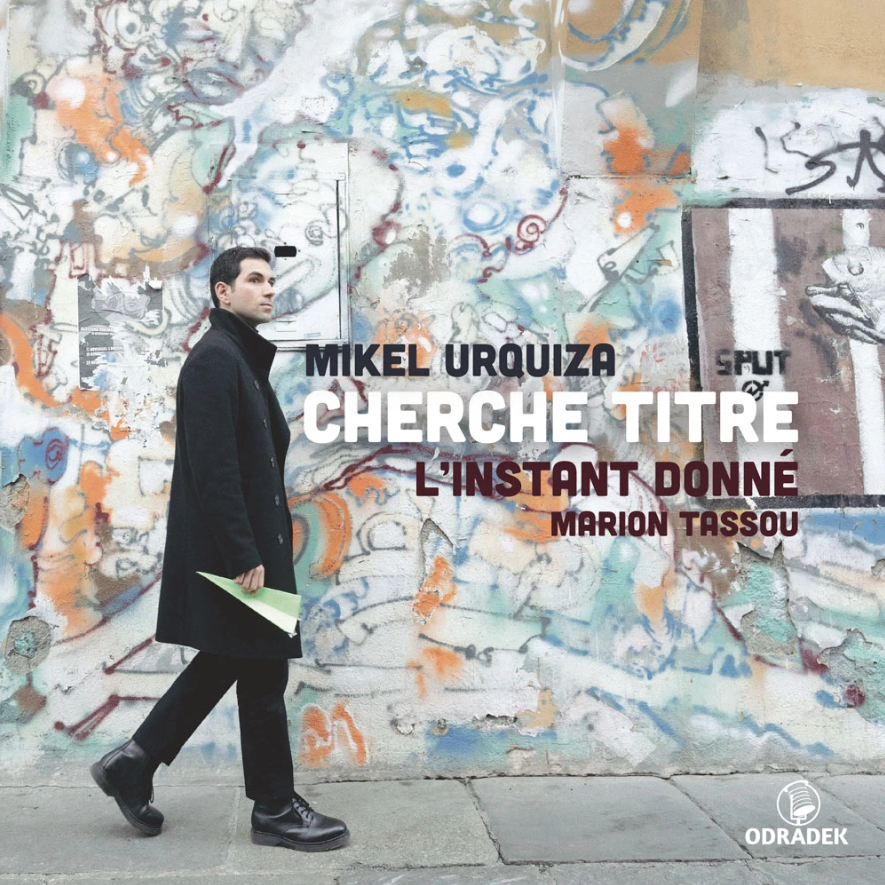 It is very enlightening that the libretto of Cherche titre, the first album by Basque composer Mikel Urquiza (Bilbao, 1988), is written in English, German and French. It suggests that the interest in Spain (and Latin America, for that matter) in new music is either one or none, as in the joke. And yet Urquiza is considered one of the young realities of current Spanish composition: last March he was awarded one of the annual prizes for young composers by the Ernst von Siemens Music Foundation. In addition to the 35,000 euros that the grant is endowed with, Urquiza will benefit from the world premiere of his next musical production.

Cherche titre (French for “search for a title”) was released earlier this summer by the US label Odradek and is made up of a wide variety of pieces composed over the last twelve years. All, as Urquiza explains in the booklet, “in my 20s”. “In 2010 I found serialism, instrumental musique concrète, spectral music, new simplicity and new complexity rather tired; fascinating, yet worn approaches for the 22 year-old composer that I was. Where to go for a new listening discovery? Very early, I understood that music does not happen in the eardrums but in the brain, that I did not want to fl atter a membrane but touch the intellect. Quotations, borrowings, rewritings are shields of Perseus that refl ect what one cannot look in the face, what one cannot hear at source.”

The entire album has been performed by the Parisian instrumental ensemble L’Instant Donné, founded in 2002, with whom Urquiza has had a close relationship for ten years. The ensemble signs a brief introductory text in the booklet, in which they use the play on words generated by the two meanings of “playing” music (“to perform” and “to play”) to refer to Mikel Urquiza as a playful composer, of whom they say that “he twists melodies, plays with clichés and, suddenly, covers his tracks to reappear better where he is not expected”.

His scores, they add, “brim with joyful musical tricks and discoveries, teeming with incongruous sound proposals that denote an art of amusement ingeniously governed by a system of rules. Because Mikel’s music only takes shape with great definition of timbre; an extreme precision in the conduct of narrative and phrases, in the contrast of purposes and in the greatest possible rhythmic accuracy…”. Analysing what the scores demand of them as performers, L’Instant Donné affirm that their performance involves “find a common alchemy – a mixture of rigour and fantasy, constraint and flexibility – to transcend the rules of the game in order to give body and life to this alert, mischievous, sometimes strange music which owes nothing to chance”.

All the compositions on the album could already be heard on the composer’s website or soundcloud (as well as other works that do not appear on the album). The only piece that does not appear is Zintzil (“suspended” in Basque), which is also the oldest, from 2010. It is followed, in chronological order, by Cinq pièges brefs (five short pieces for piano, violin and cello trio, from 2012, which actually translates from French as “five short traps”), Les lueurs se sont multipliés (for septet, from 2015), Serpientes y escaleras (Serenata) (for harp, piano, percussion, violin, viola and cello) and Contrapluma (for solo piano) are both from 2016, and I nalt be clode on the frolt (the longest piece – twelve minutes long – divided into five parts, and the most complex: For soprano and ensemble of nine instrumentalists without conductor) is from 2018. The sung parts of the latter (the texts of which are taken from the Internet pages of buying and selling or contact websites) are sung by the French soprano Marion Tassou – who has been a regular collaborator with L’Instant Donné since 2012 and in 2018 recorded the soprano parts of the album Musique de chambre, cantates by the composer Gérard Pesson, who was, by the way, Urquiza’s teacher at the Conservatoire National Supérieur de Musique in Paris, after having trained at the Musikene in San Sebastián with Gabriel Erkoreka and Ramón Lazkano-.

About Cinq pièges brefs, Urquiza, who currently lives between Paris and Turin, replies by e-mail that the title comes from a phrase by Jorge Oteiza: “Man is the shepherd of being. The artist is the hunter of being. And art? In Basque, ‘arte’ means ‘trap’: the artist is a cheat, a maker of traps”. This phrase by the Basque [Spanish] sculptor Jorge Oteiza (1908-2003) based on Martin Heidegger may come as a surprise. In the Western Romantic imagination, the artist is rather someone refined like Mendelssohn, delicate like Chopin or long-suffering like Schubert, which does not reconcile very well with the image of the Palaeolithic hunter that Oteiza thinks of”.

However,” he continues, “if Oteiza presents the artist as someone less developed than his shepherd brothers (who are a metaphor for the Neolithic), it is to explain that, since he does not know the regularity of harvests and herds, he is obliged to lead a nomadic life, always in search. In search of what? Oteiza tells us: of being. This prey is elusive and fragile, it must be cunningly lured and captured with superhuman speed. The mechanical subterfuge of a trap is imposed. The artist thus constructs his work of art, which becomes a hunting tool and a refuge, a paradigm of a labyrinth. An aseptic trap so as not to alter the being. A comfortable trap so as not to suffocate the being. A transparent trap to see it change and grow until it transforms itself into the trap. The being, isn’t it perhaps the first trap we all fall into? The artist weaves, braids and tends a replica, a double that ends up supplanting him”.

That Urquiza’s music is playful is beyond doubt. It can be heard and felt, although the composer also explains some of the mischief: in Zintzil he says that the melodies of Beethoven’s nine symphonies are mixed simultaneously, offering “an accumulation of paradoxes: symphonic music turns into chamber music; grandiose melodies become intimate.” Or Contrapluma, for piano, which he defines as a “wild rewriting of an impromptu by Schubert, whose pearly cascades mingled in my head with a drawing by Dürer” and a “pianistic tour de force commissioned for a tour in the most beautiful halls of Europe, it was the grain of madness in a programme devoted to Liszt: the perfect balance between a jackhammer and Oscar Peterson’s jazz”.

As a listener with no musical knowledge whatsoever, who is more impressed by what is going on in his eardrums than by what is intellectually hidden in the music, the disc is very, very enjoyable. Without knowing what there is to listen to, what one listen attracts the attention at all times, without losing focus and offering surprises linked almost without lack of continuity.