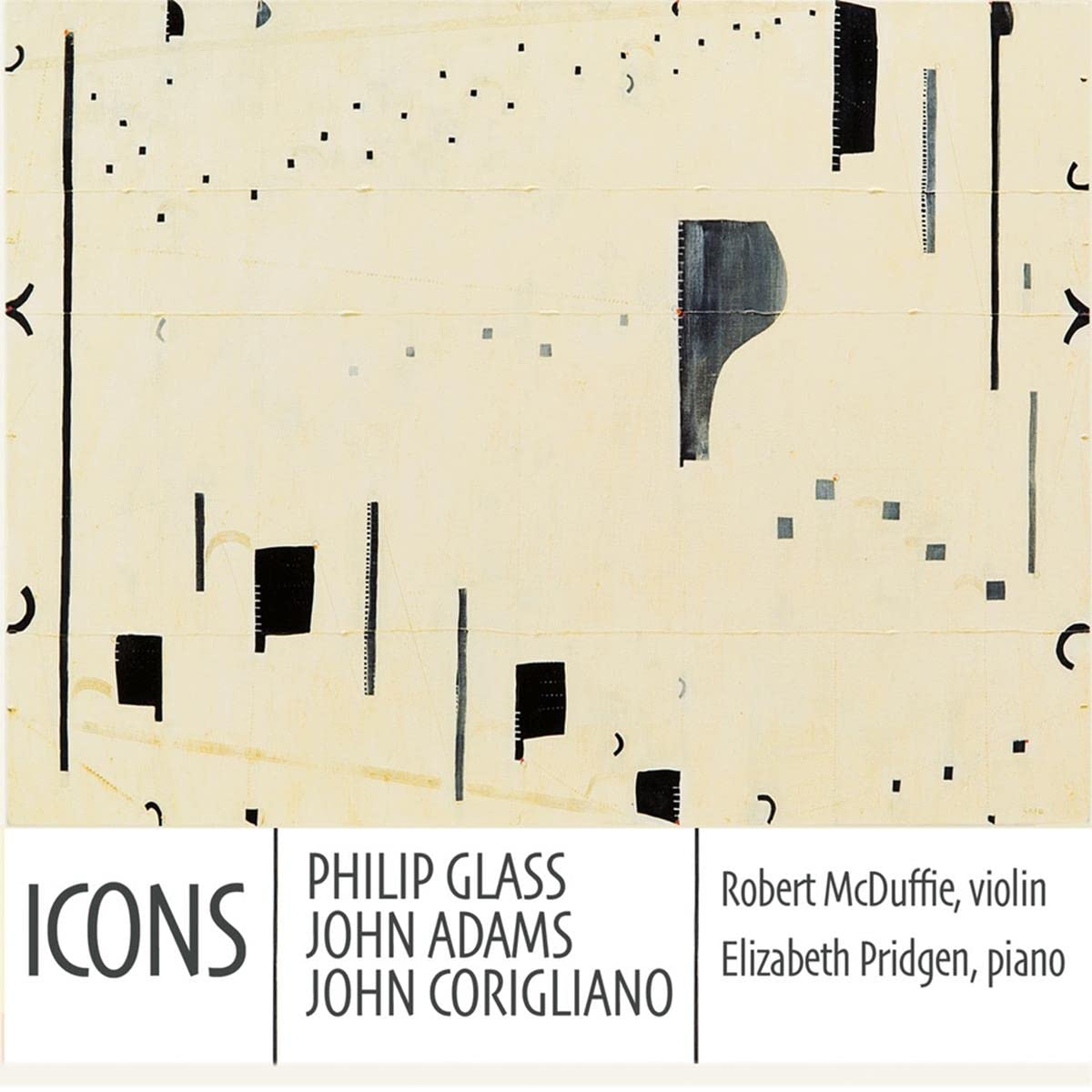 Starting with the most recent, Glass’s, it is a twenty-five minute work in three movements, premiered on 28 February 2009 at the Whitaker Center in Harrisburg, Pennsylvania by violinist Maria Bachmann and pianist Jon Klibanoff. It was commissioned by retired architect Martin Murray as a gift for the seventieth birthday of his wife, Lucy Miller Murray, founder of the chamber concert promoter Market Square Concerts.

In the booklet accompanying the record, Glass explains that among his “earliest memories of enjoying music were the many hours I spent listening to the great masterpieces of 19th century chamber music with my father, Benjamin Glass […]. Among his favorites were the violin/piano sonatas of Brahms, Faure and the great masterpiece of Franck”.

When Maria Bachmann suggested that he write a work for her and Jon Klibonoff, those distant musical memories came to Glass’s mind, and during its composition he met with Maria and Jon on numerous occasions to hear them play the new movements and revisions as they were completed. Of his work Glass warns that “even as the language of music continues to grow with the times many basic elements of structure, harmony and rhythm will have a somewhat familiar sound to today’s audiences”. Indeed, while the Sonata for violin and piano bears Glass’s familiar imprint of repetitive, mechanical rhythms, but applied in his always unique way, we can also recall the art of repetition as employed by Bach, Schubert and Ravel, all of whom are represented in this recording in their influence on the music of Philip Glass.

If in the first movement the violin is dominant – but with great subtlety and stunning crystalline beauty in the quieter, more intimate moments – in the second movement it is the piano that takes centre stage, and the two interact beautifully. Describing this movement is as difficult as trying to say something to your accompanist in an art museum about a piece, in a silent room, which would destroy the atmosphere, as anything planned to be said would be unnecessary. The third movement is the most virtuosic and lively. Each instrument has moments of exposure and the soloist/accompanist roles are further blurred here, with wonderful interplay. The feeling is as if we were seeing the first movement from a different angle or looking at it in a different light, from a different angle: it shows a very different vitality and colour to how we saw it before. Some of the repeated notes are similar, but it is as if the music has finally blossomed, experienced the growth brought on by rain and sunshine and has now opened up completely, ending in a dizzying torrent of notes from both players.

Road Movies, the piece by John Adams, is also made up of three movements: Relaxed Groove, Meditative and 40% Swing. It was premiered on 23 October 1995 at the Kennedy Center in Washington, with Robin Lorentz on violin and Vicky Ray on piano. The date is important: Adams was moving by leaps and bounds away from the more or less canonical minimalism of his early days, and away from large masses of sound (and “the big walls of triadic harmony”, as he explains in the album booklet) and gradually moving into composing for the “chamber” format. This work was composed and premiered, moreover, a few months before Hallelujah Junction for two pianos, one of his most celebrated mature pieces. However, its rhythmic twists and turns, those figures that expand and contract with seemingly piercing nervousness, are more than remarkable, especially the second movement, Meditative, which is an absolute masterpiece, composed around a light blues rhythm.

In the libretto, Adams explains each movement of the piece very well, comparing it to the different roads travelled in each film: “Movement I is a relaxed drive down a not unfamiliar road. Material is recirculated in a sequence of recalls that suggest a rondo form. Movement II is a simple meditation of several small motives. A solitary figure in a empty desert landscape. Movement III is for four wheel drives only, a big perpetual motion machine called 40% Swing. On modern MIDI sequencers the desired amount of swing can be adjusted with almost ridiculous accuracy. 40% provides a giddy, bouncy ride, somewhere between an Ives ragtime and a long rideout by the Goodman Orchestra, circa 1939. It is very difficult for violin and piano to maintain over the seven-minute stretch, especially in the tricky cross-hand style of the piano part”.

Finally, Corigliano’s Sonata for violin and piano, composed between 1962 and 1963, in an era dominated by integral serialism, is instead, as Corigliano explains in the libretto, for the most part a “tonal work, although it incorporates non-tonal and poly-tonal sections within it as well as other 20th century harmonic, rhyth­mic and constructional techniques”. It is a work, from a rhythmic point of view, “extremely varied. Meters change in almost every measure, and independent rhythmic patterns in each instru­ment are common”. Although it consists of four movements – Allegro, Andante, Lento and again Allegro – these are not independent of each other, but act as a unit and the themes of each movement are interwoven throughout the sonata. The sonata was the work that brought the composer his first public recognition, when it was premiered on 10 July 1964 at the Spoleto Festival of Two Worlds and won the competition’s chamber music prize. It is a veritable tour de force for the violin, an energetic, exuberant and splendidly crafted exercise in neoclassical style, performed and recorded on numerous occasions.