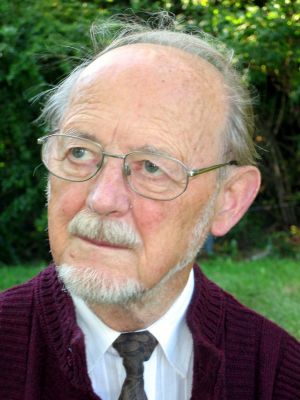 The Viennese composer considered himself a “seeker of syntheses between old and new” and, true to this motto, wrote more than 300 works covering almost all genres: from vocal works to chamber music and sacred pieces to operas for large orchestra.

Born in Vienna on 16 May 1930, he trained as a pianist with Richard Hauser. Stylistically, Ebenhöh always considered himself self-taught. In his early days he looked to post-romanticism, but his dislike of the limitations imposed during the National Socialist era led him to take an interest in more modern compositional techniques. However, he also distrusted the dodecaphonic and serial procedures of the avant-garde and strove for a synthesis, greatly influenced by his travels in the East. He moved away from traditional tonality and began to move outside “the corset of our rhythmic and harmonic habits”, resulting in music that took neither the path of conservatism nor that of the avant-garde, but opted for a third way by adopting a different aesthetic approach from the ground up. His pieces have dissonant ingredients and are also tonally attractive. The tonal, the atonal and the aleatoric enter into a highly personal connection, with short, rhythmic motifs that engage the ear.

Ebenhöh also composed five operas: Virata, with text by Stefan Zweig; Pompeji by Ödön von Hováth; Sultan zu verkaufen by Tawfik el-Hakim; Friedrich Dürrenmatt’s Herkules (although the author, after giving him permission to perform the opera based on his play Hercules in the Augean Stables, withdrew it before it could be performed) and Eduard Kranner’s Die Pfaffenberger Nacht, a chamber opera so effective that the audience was not even affected by the dissonance of the music. His other works include Kolloquium für Posaune, Schlagzeug und Orchester, op. 42/2nd (concerto for double percussion and orchestra). Tireless, he composed to the very end. On 26 December he died at the age of 92 while working on a new work.