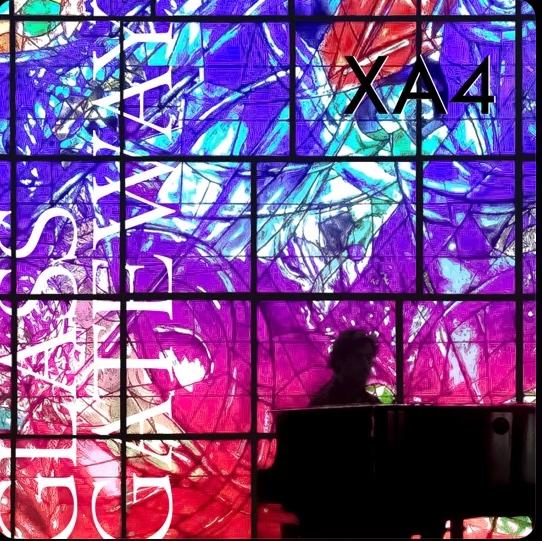 The Dutch pianist Xavier Boot (Bilthoven, 1989), also known by his stage name XA4, has released Glass Gateway, a four-piece EP with which he makes his debut on Orange Mountain Music, the record label owned by Philip Glass. Glass Gateway includes two Glass compositions – Etude No. 2 and Etude No. 12 – which Boot arranged for piano and electronics, and two of his own compositions. For fans of Glass’s music, the versions of the two Etudes have the surprise element of the electronic arrangements with which they have been treated, especially in No. 14, which begins directly with electronics, while in No. 2 the process is more gradual. However, the real surprise lies in the two pieces of his own, Floating Fields and Pro Gre Tra Gre, and their distinctly Glassian language.responding to a brief emailed questionnaire, Boot says that his compositions “are definitely inspired by all music that I absorbed in my life and the music of Glass has been a serious influence for me”.

Boot was introduced to Glass’s music by his mother. Xavier’s mother, while still a teenager, saw Einstein on the Beach in Venice in the late 1970s. Later, in 2012, the art gallerist Rob Malasch, a mutual friend of Philip Glass and Xavier Boot, invited the latter to the Amsterdam Opera to see Einstein on the Beach. The experience was an extraordinary inspiration for Xavier, which would be completed years later when Boot was able to meet Glass in person at the Melkweg – one of Amsterdam’s most famous cultural centres – when he played there in October 2017. There was a second time they came into contact, as Boot explains, “it was when he played a concert with Laurie Anderson and (cellist) Rubin Kodheli”. Finally, on their third meeting, Boot joined Glass’ musical line-up, becoming one of his “friends” at the Philip Glass & Friends concert. “We had diner in the Art Hotel in Amsterdam, then I actually became good friends with Rubin Kodheli also”. The idea that gives the EP its title derives, Boot says by email, “from my experience with Zen meditation. There is an important Kõan book called the Mumonkan which translated means ‘no gate, gateway’. There can be more gateway’s to enlightenment and the music of Glass is definitely one of those”.

Boot also sees it as a “a gateway for inspiration of new compositions or reworks, like I did on this EP. The etudes are especially sweet pieces in which the beautiful style of Philip Glass’s music and pianistic challenges merge,” Boot explains. Etude No. 2 is a heavenly beautiful piece by Philip Glass”. In his new arrangement, Xavier wanted to add more of this heaveness quality by adding crystal like echo’s of some high sounds in the piano piece. Later on when the rhythm changes Xavier added drums and synth bass to enlarge the space in which this music can exist and blend genres of music for a new fresh mix.
Etude No. 12, meanwhile, is a is a tremendous etude that really has the potential to show pianistic virtuosity. Xavier was very charmed to hear the fabulous recording of Maki Namekawa on this piece. He envisioned this to transform into a big orchestra sound and devilish drums. Xavier rearranged it with synthesizers and electronics to approach this idea of sound.
Next to this reworks of Philip Glass, Xavier added Pro Gre Tra Gre on his EP. In this piece, which is recorded in one take, with only a little addition of the synthesizer, Xavier plays with the live electronic effect of delay for a rhythmic component and a broader experience of the piano sound. As though there are multiple piano’s on different location’s in the space, playing with each other in symbiosis.
The other piece by Xavier Floating Fields started just like the etudes, as a piano solo composition. The addition of drums, synths and vocals (those by singer Feline Spiegel) is only a representation of sound that was already existing in Xavier’s imagination when playing the piano solo, acoustic version.
Boot has performed live, together with fellow Dutchman and electronic musician Yan (real name Jan van Eerd) and singer Feline Spiegel, with Glass repertoire in which the musicians intervened electronically on Glass’s compositions. Currently, Boot is still “working on new compositions”” but this EP, despite its brevity (barely twenty minutes), is not a foretaste of any larger project and he defines it “in general a sovereign entity”.