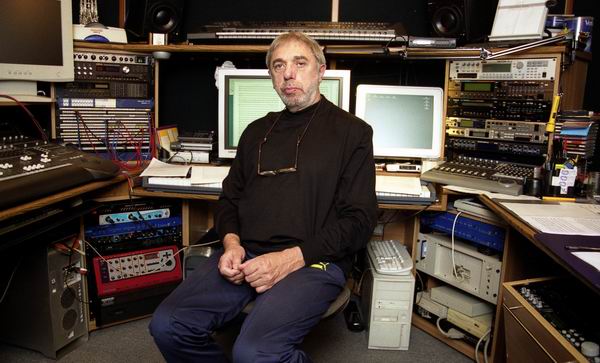 Today we have known of the death of the Russian composer Edward Nikolayevich Artemyev, who passed away on 29 December. Artemyev’s central work is film music, but for what films! Artemyev composed the music for some of the great masterpieces of Russian cinema: Andrei Tarkovsky’s Solaris, Mirror and Stalker, and Nikita Mikhalkov’s The Barber of Siberia and Close to Eden. But while in the West Artemyev’s name was largely confined to the opening and closing credits of films, in his native country he was also well known as a composer for the concert hall.

Born by chance in Novosibirsk on 30 November 1937 (his parents were passing through), Artemyev studied first at the Moscow Choral Academy and then composition with Yuri Shaporin and Nikolai Sidelnikov at the Moscow Conservatory.

Already in the 1960s, Artemyev became interested in electronic sound production. He benefited from the fact that the Soviet engineer Yevgueni Mursin had developed the ANS synthesiser (ANS is short for the name of the composer Alexander Nikolayevich Scriabin). Artemyev began experimenting with this device and soon became the Soviet Union’s first electronic artist and a pioneer in this field, internationally sought after and often imitated.

Artemyev’s sound worlds, which oscillated between Foley sounds and rapturously supernatural sounds, perfectly underlined not only the character of Tarkovsky’s films, with their long takes and taciturn dialogue, but also benefited the new cinema of the Soviet Union and, later, of Russia in general. Films like Siberiade or Burnt by the Sun are inconceivable without Artemyev’s music. But Artemyev also composed for the concert hall: his style was a virtuoso blend of avant-garde elements and harmonic movements considered “typically Russian”.