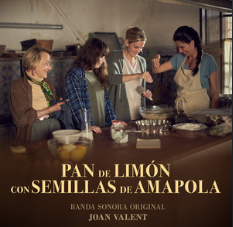 Last spring, the Spanish pianist and composer Joan Valent finished recording the soundtrack for Pan de limón con semillas de amapola [Lemon and Poppy Seed Cake], the new film by Benito Zambrano, premiered last month at the SEMINCI in Valladolid, and based on the novel of the same title by Cristina Campos. As of this week, the soundtrack can already be heard on Spotify.

Pan de limón con semillas de amapola escapes the limits of incidental music. Although it consists of twenty-three pieces, they are not short fragments, but complete instrumental compositions that on several occasions comfortably exceed four minutes in length, for a soundtrack that lasts almost an hour and twenty minutes.

Valent himself, in an interview published in the Balearic newspaper Última Hora on 11 May, described the music composed for this soundtrack as “simple and very Mallorcan” and “very inspired”. A “minimalist work, with only the cello and percussion recorded in Luxembourg. The rest in Mallorca”. Valent commented in this interview on the simplicity of the compositions “because Zambrano didn’t want to use strings so as not to make melodrama more melodramatic, and that makes it more complex to maintain the discourse during the two-hour duration”. It was necessary to be, in Valent’s words, “austere in the musical emotion so that the image grows and the drama is expressed through the image and the dialogue”.

Forged in the minimalist school, in which he has been included since his recording debut in 2000, with Ars Ensemble, Valent considers this to be “one of the best soundtracks I have ever made. I composed the music live, as we projected the images of the film. It’s not usually like this, as normally they send you the script and you start writing the music”.

With the collaboration of Joan Carbonell and Tolo Prats, Valent assures that he has “managed to find the pulse of the film, which is a melodrama, and therefore there is no need to fall into melancholy”.