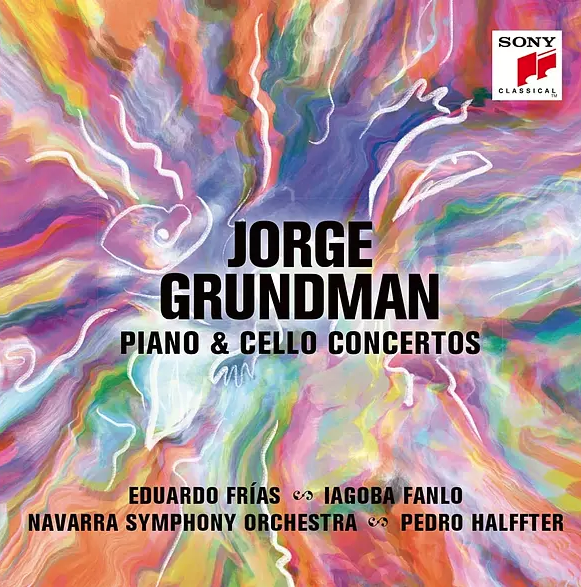 The Spanish composer Jorge Grundman (Madrid, 1961) has just released Piano & Cello Concertos, an album published by Sony Classical España which brings together three world first recordings of his works Piano Concerto in E minor “The Toughest Decision of God”, the Concerto for cello and string orchestra, opus 76, “Act of Contriction” and the orchestration of his Etude for piano no. 1, opus 38, WATPF – “We are the forthcoming past”. The disc features performances by pianist Eduardo Frías and cellist Iagoba Fanlo and the Orquesta Sinfónica de Navarra, all conducted by Pedro Halffter Caro.

His music is predominantly emotive due to his extensive use of tonal and consonant minor chords. In an interview with Phillip Scott for the March/April 2010 issue of the American magazine Fanfare, Grundman explained that “in the second half of the 20th century, many composers preferred to write for a small group of individuals and lost touch with the wider public. The idea of music as a communicative art was ignored. However, music is the only art that does not exist until it is performed. To reach its full potential, the composer, the performer and the audience have to speak the same language. In many countries, this cerebral approach to composition is being forgotten and composers are returning to consonant music. By the way, I don’t mean consonance simply in the harmonic sense, but in the sense that all participants in the musical experience – composer, performer and audience – are on the same level”.

With a background as a pop musician – he was part of La Movida madrileña groups such as Farenheit 451 and Trópico de Cáncer and collaborated with Pistones – his classical training has always been there, although since 1985 he has dedicated himself professionally to higher education, as a full professor at the Escuela Técnica Superior de Ingeniería y Sistemas de Telecomunicación of the Universidad Politécnica de Madrid. He founded the Non Profit Music Chamber Orchestra with Ara Malikian and his works have been performed by groups such as the Trio Arbós and the Brodsky Quartet, as well as being the author of an opera based on the work of Miguel Delibes Cinco horas con Mario.