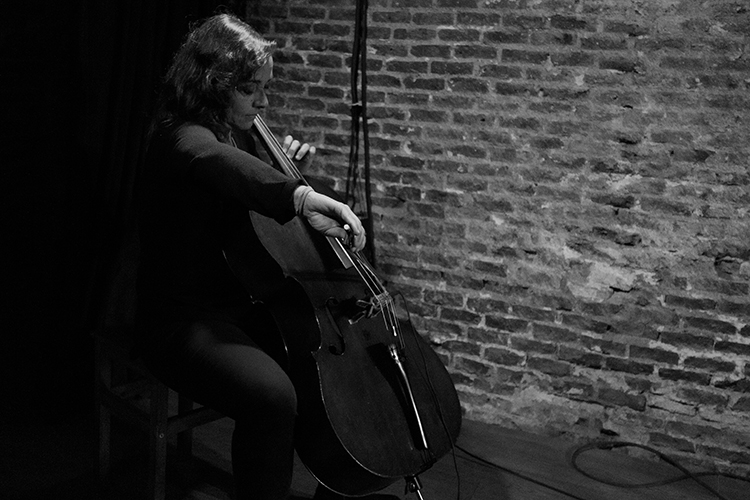 I do listen to a lot of free improvised music. I try to go to as many concerts and sessions as I can and I listen to the work of friends and colleagues. But I also listen to a wide variety of other types of music, from Jacob Collier to Rosalía and El Niño de Elche through Cuba and Argentina, and I try to fill my gaps in the field of contemporary classical and Free Jazz, although I feel that there is not enough time in life for so much.

Although I don’t know if it is necessary to listen to free improvised music, I suppose that each one arrives on his or her own path and I am surprised by the amount of different paths that can be taken. I think that for me personally, in addition to “conventional” music, which influences me every day and a lot, it has also greatly conditioned my plastic side.  I find many similarities between painting and improvising, many similar sensations.

I try to do what I feel and I take it very seriously, and I am also very grateful when someone tells me that they like or are interested in what I do because it encourages me to continue. I also take into account the criticisms if they are respectful: sometimes they bring me something and sometimes they don’t, or I end up deciding that I don’t agree with them and they reaffirm me more in my decisions, but I always give them a few turns.

In my opinion art is something we do without knowing very well what we are doing (like almost everything in life on the other hand) and I think that thinking a lot about how you are going to be judged is very paralyzing. On the other hand, destructive judgments often seem to me more a need to exercise the power of those who make them than anything else. So I just ignore them.

I assume that what I do is one of the multiple possibilities of what could be done, and that it has a quite relative importance. I could do it another way, but I want to do it this way, not because it is the best or the only way, but because I need to do it this way. It’s as transcendental as that. If you don’t like it, fine, absolutely nothing happens.

In general, I don’t believe that there are autonomous genres, no matter how much purists insist on setting boundaries. In particular, free improvisation feeds on as many genres and languages as there are improvisers, that’s why it’s free. For some people Jazz is more important, and for others punk-rock or classical, but nobody comes from nothing. Actually, that’s what I find most interesting.

In another sense, I think there is something that makes free impro quite autonomous, and that is that it doesn’t make money. Paradoxically, that’s a very big advantage, since we don’t depend economically on success and sales. We self-produce our records and organize our sessions and concerts outside the commercial circuits, and that gives us a lot of freedom when it comes to creating.

Formulas and patterns are very useful and are always there. Whether we improvise or rehearse, we will always fall back on something known. Intuitively and spontaneously we use what we have assimilated, we never invent from nothing. Then we can work on it, modify it or use it as it is. It’s another thing to be repetitive or boring, but composition and rehearsal don’t assure you to stop being repetitive. And I love the first takes.

I think we make art and music a little bit blindly, and that’s what’s exciting. I don’t have a closed concept of what I have to do, or at least not consciously. I try to be receptive and develop the ideas that come to me with the tools I have. At the moment I focus my creativity almost exclusively on music and teaching, but at other times I have painted or designed lights and it’s always a bit similar: sometimes I find something that works and sometimes it doesn’t, and I have to keep insisting. Suddenly a new path appears to me and I have to dive headlong into it to get the most out of it without really knowing where it’s going to take me. The most important thing is to dare, that’s why you have to take care of the censures that paralyze you, whether they come from yourself or from the outside, and accept mistakes and failures as part of that search. And may inspiration catch you working.

Elsa Mateu Tricás came to Improvisación Libre in 2012 in Tenerife. She studied music from a very young age and dedicated herself professionally to the cello during a stage of her life; although she left it for a few years to study Scenography and dedicate herself to stage lighting. Thus she arrived on the island in 2011, as a lighting designer for theater and dance, and there she stayed working on several different projects until she returned to Madrid in 2017.  In the artistic environment of Santa Cruz she met the KEROXEN Festival and the musicians who were participating that year with the Big Band of Visual Noise, such as David Paredes and Ricardo Marichal, who immediately invited her to collaborate with them. She started to go on Wednesdays to the sessions at Equipo Para and met there the rest: David Perreko, Carlos VKMonitor, Guillermo Horta, Simone Marín, Rafa Pinillos, etc… Later her colleagues from Salétile (https://saletile.bandcamp.com/), Dani Tupper and Ruymán García appeared and with them she developed a more stable project during the time she was there. And when he returned to Madrid he contacted Javier Entonado and became part of the Raras Músicas team (https://rarasmusicasmadrid.wordpress.com/), along with Gregorio Kazaroff, Jorge Cabadas and the aforementioned J.G. Entonado (a.k.a. Arín Dodó). He is currently part of the group Marion Morrison, with Chema Pastor, J.G. Entonado and Tomás Lucas, with whom he has recorded several albums and has participated in festivals such as NUMAcircuit 021. He also organizes the “Morrison Project”, together with J.G. Entonado; monthly meetings of free improvisation designed to be a space for experimentation and research in the practice of free improvisation and thus encourage the creation of a language of their own and facilitate contact between improvisers from different disciplines.