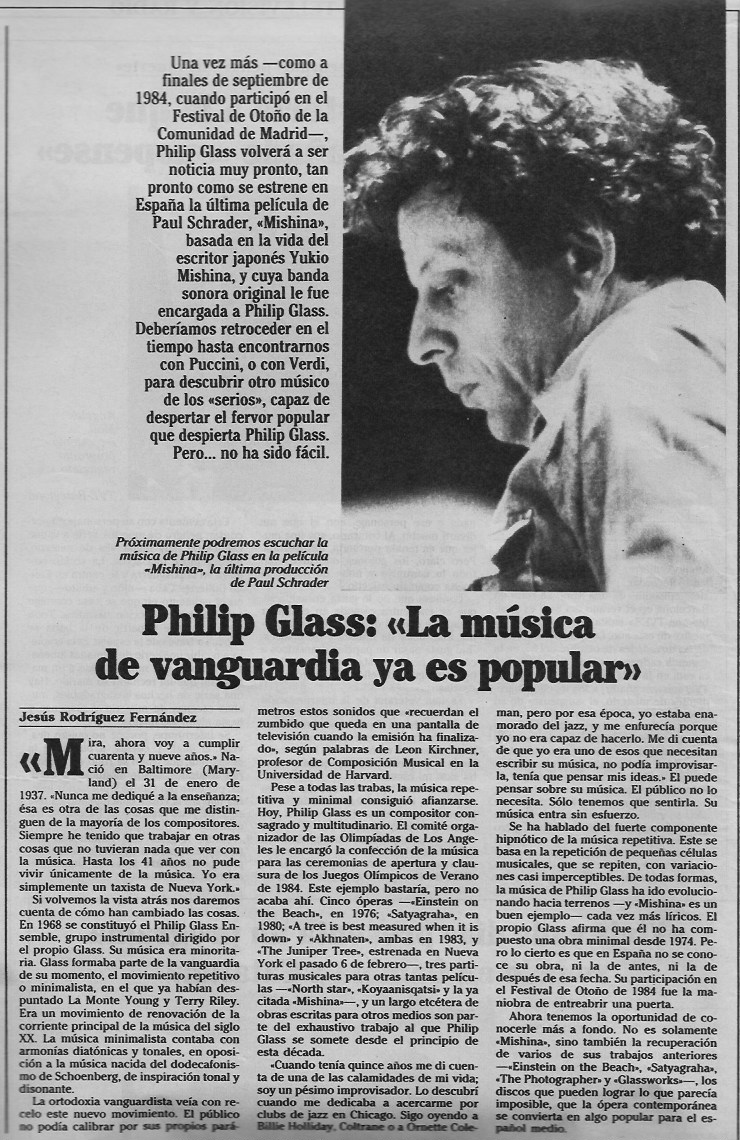 In January 1986 Philip Glass visited Spain to promote his work, invited by the CBS record company, whose Masterworks label had begun to release his first two operas, Einstein on the Beach and Satyagraha. The interview I conducted with him, the first of three occasions I have had the good fortune to meet him face to face, was published in the now defunct newspaper Ya on 20 January of that year. Today, 31 January 2022, Glass turns 85 and although that number might suggest a well-deserved retirement, the composer is still one of the most productive composers of our time. And, in any case, he is one of the most influential.

The generation of composers to which he belongs opted for classical harmonies in combination with fragments of repetitive motifs, and did so successfully, although they faced harsh criticism from the outset. This generation of young composers, led by La Monte Young and Terry Riley, and soon followed by Steve Reich and Glass himself, were the forerunners of the social upheaval of 1968, transforming the thrust of the New York metropolis and the social upheavals into sound. Meanwhile, the doyens of the American avant-garde at the time, such as Aaron Copland, produced works that were born old, rigid and fragile, which did not musically reflect these new developments.

Glass created a distinctive musical current of continuously flowing rhythms that evoke trance-like effects in the listener. These finely balanced layers of sound with repetitive rhythmic structures are still recognisable in Glass’s style today. Subtle metamorphoses constantly emerge from the sea of broad sounds; simplicity is combined with opulence, which certainly increases with the composer’s age, as can be seen in the monumental symphonies he has been composing – as you can read if you enlarge the image accompanying this text, Glass states that he has not created a single minimalist work since 1974 – and which this year will reach his 15th Symphony, with the premiere on 3 March at the Kennedy Center in Washington.

Glass learned to play several instruments at an early age, played in orchestras and bands, and embarked on a conventional musical education that took him to Chicago and the Julliard School in New York. By then he was already rejecting dodecaphonic technique or serialism, although he had not yet found his own style. This happened during his stay in Paris to study with Nadia Boulanger. Long before the Beatles, the American came into contact with the Indian sitar master Ravi Shankar and travelled through India, North Africa and the Himalayas. Back in New York in 1967, Glass’ repetitive style was born.

Success began to come in 1974 with the premiere of his three-hour composition Music in Twelve Parts, premiered at New York’s Town Hall. His opera Einstein on the Beach, created with Robert Wilson in 1975, then revolutionised the genre by dispensing with dramatic narrative. Glass’s Einstein is lost on the beach, while the opera-goers lose all sense of time. With monumental operas such as Satyagraha (1980), Akhnaten (1984) or Kepler, this latter composed for the 2009 Capital of Culture in the Austrian city of Linz, Glass established himself as one of the most productive stage composers of his time.

The new Linz Music Theatre also opened in 2013 with the world premiere of his opera Spuren der Verirrten (The Lost), an adaptation of the 2006 play of the same title by 2019 Nobel Prize winner Peter Handke. Glass’s ties with the Upper Austrian capital are close. Glass arrived there thanks, among other things, to his friendship with the former music director of the Linz Opera, Dennis Russell Davies. Many of Glass’ symphonies and some of his operas received their world or European premieres in Linz. And this 85th birthday will be celebrated there again, with Russell Davies and his wife, Maki Namekawa, playing this evening at 19:00 as a piano duo in Linz’s Ars Electronica Center, flanked by the real-time visualised creations of Cori O’Lan. The concert, consisting of the 6 Etudes for Piano, the Piano Sonata and the Four Movements for Two Pianos, will also be broadcast on the internet.

Glass may be following the event on the internet, but he certainly won’t be celebrating his birthday in Linz tonight, as his friend Laurie Anderson is organising a party in New York, with performances, live music, cupcakes and ice skating at The Rink, the iconic skating rink next to Rockefeller Center, which is also celebrating 85 years…