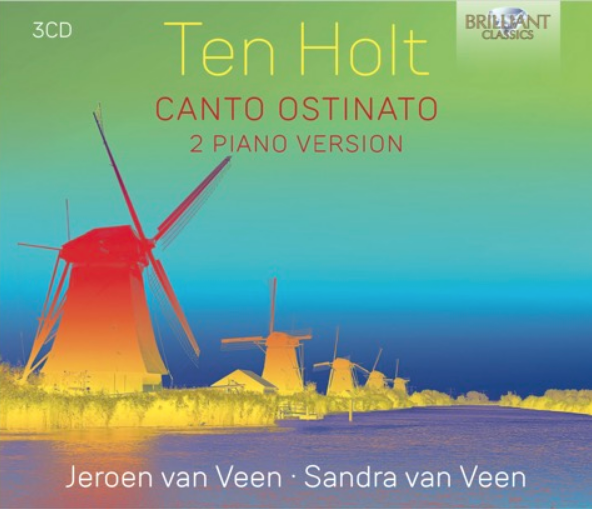 “Canto Ostinato”, by Simeon Ten Holt, in a version by Jeroen and Sandra van Veen.

The Dutch composer Simeon Ten Holt passed away in 2012. He was one of the most important composers of the Netherlands in the 20th century. Throughout his career he was involved in serialism, neoclassicism and many other currents of contemporary classical music. However, the work for which he is best known is his Canto Ostinato, composed between 1976 and 1979, an extraordinary repetitive, minimalist work consisting of more than a hundred sections, which is notable for the fact that all performance decisions are left to the performers. Dynamics, tempo and timbre are also left to the performer, meaning that no two performances are ever the same. In fact, even the instrumentation can change and there are many examples of this. Among the interpretations of this work are versions for four pianos, for two pianos, for two marimbas, for harp and electronics, for eight cellos and many more.

Another Dutchman, Jeroen Van Veen (Herwen en Aerdt, Gelderland, 1969) is a composer and pianist who has specialised in the minimalist repertoire – his is, among many other recordings, the Minimal Piano Collection, with almost thirty hours of music, on as many CDs, published by the Brilliant Classics label, with works by Dennis Johnson, Tom Johnson, Peter Garland, Julius Eastman, Kyle Gann or Chiel Meijering, as well as the indispensable Glass, Reich, Adams, Riley, La Monte Young, Meredith Monk, Pärt, Wim Mertens or Michael Nyman, among many, many other composers -, so the confluence between Ten Holt and Van Veen was logical. And, in fact, Van Veen has already recorded several versions of Canto Ostinato, which has become not only Ten Holt’s best-known work, but also the most performed, both at home and abroad, and is now something of a cultural hallmark of the small Central European country.

In this new version Jeroen performs the work accompanied by his wife, the pianist Sandra Van Veen (née Sandra Mol). The recording runs to 3 hours and 23 minutes, with 26 of the sections planned by the composer, but includes, interspersed, Incanto 6, three pieces composed by Van Veen himself, inspired by Ten Holt’s own work.

The work itself is enveloping, lively, hypnotic, minimalist and repetitive, as when Nyman first applied the term… For those familiar with the work, revisiting it will be no problem. For those who don’t know it, on the other hand, it will be a surprise and, of course, a discovery. And if you want to see it live, Van Veen has several dates scheduled in February, March and April in various cities in the Netherlands.