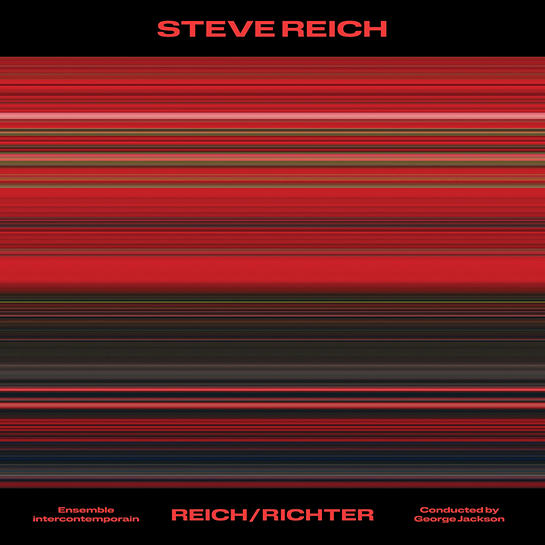 Nonesuch Records today released the first recording of Reich/Richter, the work Steve Reich composed for a multimedia show created for the opening of the New York cultural centre The Shed, which ran from 6 April to 2 June 2019. The inaugural show was conceived in two parts: one linking Steve Reich and German painter Gerhard Richter and the other Richter and composer Arvo Pärt. Both explored the shared sensory language of visual art and music. The Reich/Richter collaboration, commissioned by The Shed, connected the mathematical formulas used by Richter for his Patterns series of paintings and Reich’s repetitive musical structures in a moving image work with German filmmaker and video artist Corinna Belz synchronised with a live performance of Reich’s new composition, which featured over a hundred performances during the two-month run of the inaugural exhibition.

The Shed-driven collaboration is the first work directly linking Richter and Reich. Despite their long and successful careers and being of the same generation (82 and 85 respectively), their paths had crossed only once before, in 2009, when Richter asked Reich to perform his Drumming as part of a Richter exhibition at Cologne’s Museum Ludwig, as Reich tells American conductor Brad Lubman in the recently published book Conversations. We didn’t spend much time together,” Reich explained of that brief first meeting, “but we had a lot of mutual affection and respect for each other, and I began to look more closely at what he had done, and I was enormously impressed.

The relationship between the two artists stems from the remarkable fluidity with which the two artists’ approaches dialogue with each other, as Reich’s rigorous, repetitive musical structures fit perfectly with the systematic formula Richter applied to create his Patterns series, made through an artistic process devised by the painter in which he uses a computer to divide an image vertically into two halves and then divides those halves into quarters, creating a mirror image. This process was repeated exponentially, dividing the painting into quarters, eighths, sixteenths, and so on until it reached 1/4096, each step following the same procedure of division, mirror image and repetition. The result was a series of increasingly dense patterns and, finally, solid swathes of colour. As Reich also recounts in the aforementioned book, Richter told him that when he created this series of paintings he used to listen to Music for 18 Musicians, the New York composer’s work composed between 1974 and 1976 and published by ECM in 1978, and that he was going to work with Corinna Belz on a film about the process, which would end up being titled Moving Picture (946-3).

Needless to say, Richter’s proposal that Reich create a new score to musically illustrate this project was to Reich’s liking. The composer explains in Conversations that he wanted to employ the same structure as the pictorial works, beginning with an oscillating two-note pattern that progresses to four notes, then to eight, then to sixteen, and finally slowing down to reflect the increasingly abstract nature of the film, in a reverse back-and-forth process, slowing the oscillations to eight, four and two. During the Reich/Richter exhibition at The Shed, the viewer/listener experienced a stream of images and their rhythmic flow interpreted by the music and, at the same time, a musical composition embodied by the art.

Prior to the appearance of the album Reich/Richter has been performed live on several occasions, without accompanying Belz’s film. Among other venues, it has been performed at the Barbican in London. The recording of Reich/Richter released by Nonesuch was made on 7 March 2020 in a live concert by the Ensemble Intercontemporain conducted by George Jackson for France Musique in the Pierre Boulez Hall of the Philharmonie de Paris, in the Cité de la musique. The result is a composition of just over thirty-six minutes divided into four parts – Opening, Patterns & Scales, Cross Fades and Ending – written for fourteen instruments (pairs of flutes, oboes, clarinets, vibraphones and pianos and violins, plus a viola and a cello). Reich/Richter opens with the oscillating movements to which Reich had referred and which are recognisable from Reich’s music of forty or fifty years ago, although on this occasion harmony now plays a much more important role, in addition to that offered by rhythm and texture.

In Patterns & Scales and Cross Fades the music abandons the possible rigidity of the structural pattern and slows down in a spacious central section with longer, sustained notes, before returning to an intense, fast-moving finale, with which it returns to the semiquavers of the opening. The reference to Music for 18 Musicians is inevitable, because of the parallels drawn in the relationship between Richter and Reich. But although that work by an early, minimalist Reich has remained one of his musical summits, Reich/Richter manages to arouse an interest in solo (on disc) that goes beyond the audio-visual spectacle that gave it its starting point and raison d’être.

Among the upcoming live performances of the work, the first will take place on 8 September at the SZentrum in the Austrian town of Schwaz, by the Windkraft Tirol ensemble, conducted by Kasper de Roo. Other confirmed performances will take place in the United States: at the Walker Art Center in Minneapolis on 23 March 2023 by Ensemble Signal, and on 1 April 2023 at the Walt Disney Concert Hall in Los Angeles by the LA Phil New Music Group, conducted by Brad Lubman.