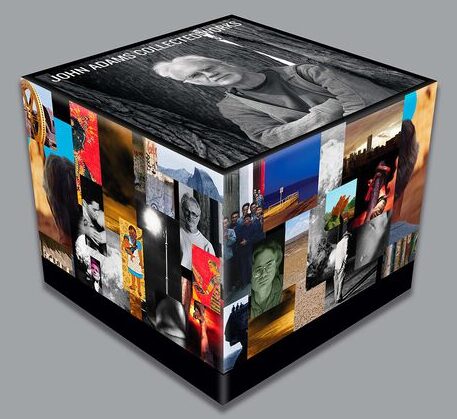 The Nonesuch label releases a box set of 40 John Adams CDs for US $172.

Nonesuch, the record label that has been publishing the work of American composer John Adams since 1985, yesterday released the John Adams Collected Works box set, a collection of forty CDs spanning more than four decades of the composer’s career with the label. Since 1985, the company has released forty-two first recordings and thirty-one albums by Adams, of which six are complete operas, oratorios or theatrical performances. Four of Adams’ Nonesuch albums have won Grammy Awards, among other accolades.

While the Nonesuch recordings comprise thirty-five of the forty discs on Collected Works, the box set also includes recordings on other labels, including: the Los Angeles Philharmonic’s recordings of The Gospel According to the Other Mary (2014) and Must the Devil Have All the Good Tunes? (2020), with Yuja Wang, on Deutsche Grammophon; a recording of Roll Over Beethoven (2019) by pianists Christina and Michelle Naughton for Warner Classics; and the San Francisco Symphony’s recordings of Absolute Jest / Grand Pianola Music (2015). The final cassette in the collection is a recording of Harmonielehre with the Berliner Philharmoniker conducted by Adams, and follows on from the first recording of the same piece by the San Francisco Symphony conducted by Edo de Waart for Nonesuch, which is also the first disc in the collection.

The release includes two extensive booklets with texts by composers Timo Andres and Nico Muhly, Jake Wilder-Smith (who appeared in 2006, at the age of eleven, as a child singer in a performance of Adams’ Christmas oratorio El Niño, which took place at Boston’s Symphony Hall), soprano Julia Bullock and former Nonesuch Records president (and current president emeritus) Robert Hurwitz, who states that “John Adams coming to the label was one of the central events in our company’s history. The recordings were done in real time, mostly within a few months of a piece’s first performance. Every recording was either conducted by John, or made under close supervision of the composer, who was in the control booth for every album—when he wasn’t on the podium […] The idea of a label recording all of the works of its most cherished composers had been long established in the classical record business, most notably the efforts of Columbia with Stravinsky, Decca with Britten, and Deutsche Grammophon with Stockhausen.” With this box set, Nonesuch and Adams now join that list, which in 2023 will also be joined by Steve Reich, whose work Nonesuch has also recorded almost exclusively since 1985.