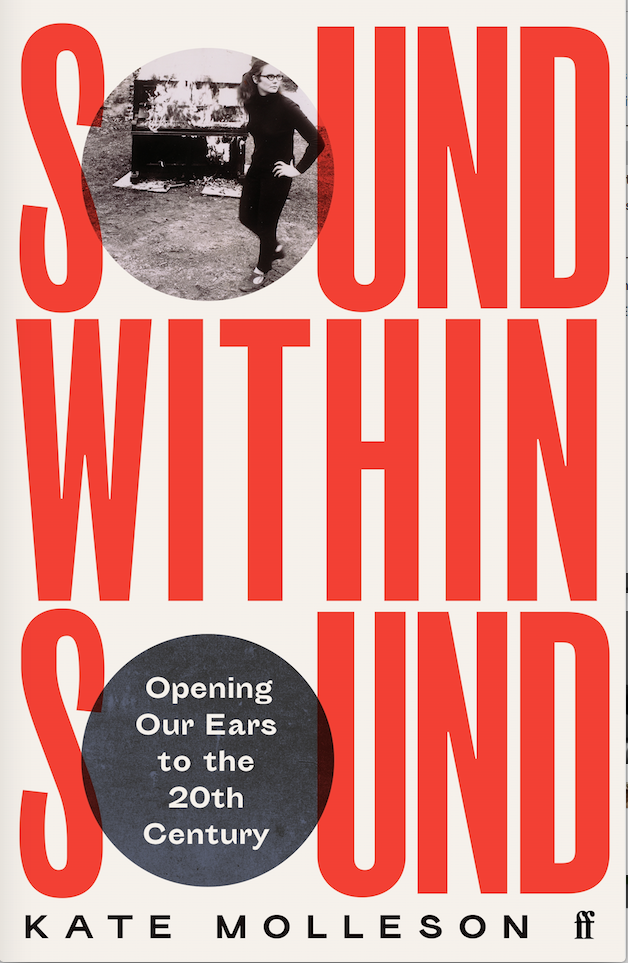 In the introduction to the book Sound Within Sound (Faber & Faber), her author, the British music journalist and BBC broadcaster Kate Molleson, explains that it was the American composer George E. Lewis who encouraged her to do it. They were both teaching at the Darmstadt summer courses – so influential in the 1950s – when she told him about an old idea: to write “some sort of new history of twentieth-century composers. I don’t mean the usual suspects. I mean composers who get left out”. The composer suggested her to “choose some interesting composers who don’t make it into the mainstream history books. Tell their stories. Prove that they were all doing amazing stuff. Prove that they existed. Make your readers want to hear their music”.

Molleson explains that in her childhood she discovered classical music through BBC Radio 3 and that as a music journalist she was surprised to discover that the “official” narrative, the concert and festival programmes, always revolved around the same group of composers that she had learned about in the introductory music books for children that her parents had given her as a child, when she realised her passion for classical music. She missed the innovations in classical music made in the 20th century and was annoyed that so many innovative figures were missing from the history books she had to read during her undergraduate and postgraduate studies, both in Canada and the UK. It is not, she says, a question of forgetting the “the Passions of Bach, the symphonies of Beethoven and Brahms, the earth-shaking ballets of Igor Stravinsky. Nobody is mooting that we should ditch Mozart or Mahler”, but of broadening the canon. And she gives the example of Graham Vick, the conductor and artistic director of the Birmingham Opera Company, who died of covid-19, aged 67, in July 2021, who “said that if opera has a place in the world, it must be of the world. He refused to watch the music he loved become ‘the guarded privilege of an ever-smaller section of British society’, so he took opera out of its hallowed spaces and got citizens of Birmingham singing Verdi”.

For the book, Molleson consulted numerous musicians and musicologists, who spoke to her about the need to show new narratives, not to make “new narratives” official, but to avoid the drama of what has been happening until now: the disappearance of names and music outside the canon dictated by not so invisible powers, something that is already very difficult to remedy with respect to music before 1900, but that we still have time to rescue…

The characters to whom Molleson offers a second chance are very varied. She herself says that “several of them could also appear in histories of jazz, improvisation, electronic or folk music, which might explain why they get ignored from multiple angles”. The ten she has recovered are the Mexican composer, conductor, violinist and scientist Julián Carrillo (Ahualulco, 1875 – Mexico City, 1965), a pioneer of microtonalism; Ruth Crawford (East Liverpool, Ohio, 1901 – Chevy Chase, Maryland, 1953), American pioneer of atonality and serial music, collaborator of the renowned ethnomusicologist Alan Lomax (and stepmother of the well-known folk singer-songwriter Pete Seeger); the Brazilian Walter Smetak (Zurich, 1913 – Salvador de Bahia, 1984), inventor of instruments and “godfather” of the Tropicália of Caetano Veloso, Gilberto Gil and Tom Zé; the Filipino José Maceda (Manila, 1917 – Quezon City, 2004); Russian Galina Ustvolskaya (Petrograd, now St. Petersburg, 1919 – St. Petersburg, 2006), whose composition teacher, Dmitri Shostakovich, said he was “convinced” that her music “will achieve world renown, and will be appreciated by all those who perceive that truth in music is of first-rate importance”; Ethiopian nun, pianist and composer Emahoy Tsegué-Mariam Guèbru (Addis Ababa, 1923); the Danish electronic music pioneer Else Marie Pade (Aarhus, 1924 – Gentofte, 2016); the American pianist, composer and university professor Muhal Richard Abrams (Chicago, 1930 – New York, 2017); the French Éliane Radigue (Paris, 1932), a key figure in ambient, electronic and minimalist music, or the New Zealander Annea Lockwood (Christchurch, 1939).

In some cases, the pale light in which the composer is seen is from an Anglo-Saxon ethnocentric point of view. The Filipino José Maceda was indeed recognised in his native country during his lifetime, as Molleson recounts: one of his perhaps most monumental works, Ugnayan, was funded in 1974 by the then Philippine First Lady Imelda Marcos, and was broadcast nationally on numerous radio stations. Subsequently, in 1998, he was named National Artist of the Philippines… but cannot be found on Spotify. Julián Carrillo, meanwhile, was director of the National Symphony Orchestra of Mexico between 1918 and 1924, a position he held simultaneously with that of director of the National Conservatory in 1920 and 1921. She explains his Theory of Sound 13, based on intervals smaller than a semitone, and recalls that his hometown, Ahualulco de Pinos, was named in his honour in 1932, Ahualulco del Sonido 13 (Ahualulco of Sound 13). Twelve years later, in 1944, a municipal decree reverted the honour and the name of the town was shortened to Ahualulco… She also recounts an alleged anecdote that occurred years after his death, when a popular television programme invited a group of musicians to perform live music by Sonido 13. After the performance, the host announced that the network had received multiple phone calls from viewers across the country reporting strange phenomena: animals across the nation had gone berserk in response to the microtonal music coming through their televisions. Dogs in Mexico City howled and danced, fish in Cuernavaca attempted suicide against the glass of their aquariums and, in Puebla, canaries battered the walls the walls of their cages and then died in ecstasy…

In other cases, there was clearly a bias towards concealment (most glaringly, perhaps, that of Ruth Crawford, the first woman to receive a Guggenheim Fellowship for her work, in 1930, but whose talent was constantly scorned by her husband, Charles Seeger (father of Pete Seeger, and whom she married in 1932, abandoning composition the following year, though she recovered her work in the late 1940s, shortly before dying, prematurely, at the age of 52). Her example, Molleson argues, is that of women all over the world who have had to choose between fulfilling their personal potential or being a working mother without any support (a problem that Éliane Radigue will also discuss), while the next on the list, the Swiss-born Brazilian Walter Smetak, paid dearly for his decision to leave the heartland of classical music in Europe for the tropics, relegating him to the periphery of music history.

Molleson’s interest in Galina Ustvolskaya has sentimental components: one of her grandfathers, Andrei Viktorovich Ivitsky, escaped as a child from post-revolutionary Petrograd in 1919, the same year Ustvolskaya was born here, and after crossing over to Finland came to the UK.

With several of the ten authors included in Sound Within Sound already deceased when the book project got underway, Molleson relied on interviews with close associates, such as Peggy Seeger, daughter of Ruth Crawford, but in other cases, and thanks to his work at the BBC, Molleson had already been able to personally interview Emahoy Tsegué-Maryam Guèbrou in Jerusalem or Éliane Radigue in her Parisian flat on rue Liancourt in Montparnasse. Incidentally, the title of the book is a small tribute to the 90-year-old French composer who says that she “always looks for the sound within the sound”. With her, she talks about how she managed to iron out the differences between Pierre Schaeffer and Pierre Henry, or about her arrival in 1963 in the New York of John Cage and the Fluxus concerts and happenings. And of the principle of “Ockham’s razor” (promulgated by the English Franciscan William of Ockham – known in French as Guillaume d’Occam), according to which “all things being equal, the simplest explanation is usually the most probable”.

One of the virtues of the book is that it is not written for musicologists, but for the amateur and the curious. It abounds in anecdotes – Annea Lockwood’s burning of pianos to record their sound; teenager Else Marie’s time in prison for blowing up telephone boxes, during the Second World War, as sabotage organised by the Danish resistance against the Nazis, for example – and helps us situate the characters in their environment and time. And she achieves what George E. Lewis asked of her, making readers want to listen to their music.